Jozie & Sam’s Engagement Session RiNo District Denver CO was so much fun and the location they chose was beautiful!

The RiNo District stands for the River North Art District in Downtown Denver. It is known for its murals and beautiful artwork. These murals are beautifully designed and add a beautiful backdrop to any photographer’s images.

They were so cute and quirky and I love the way that Jozie looks at Sam! You can tell their in love and are made for each other. Engagement Session RiNo District Denver CO

We had a TON of murals to choose from and since we were going to be doing two sessions downtown RiNo district, we didn’t want to exhaust the same places!

This session was a ton of fun and we are so glad that we got to work with Jozie & Sam for their engagement session! I cannot wait to see where their love goes from here! Thanks for allowing us to capture your special moment from behind our cameras! 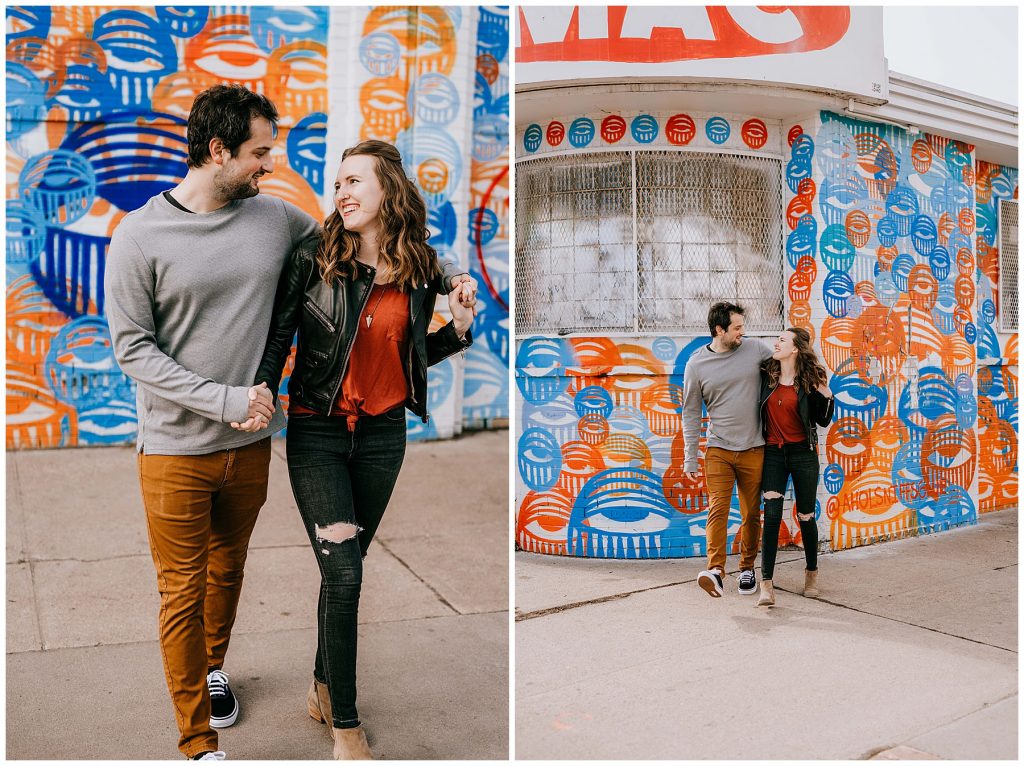 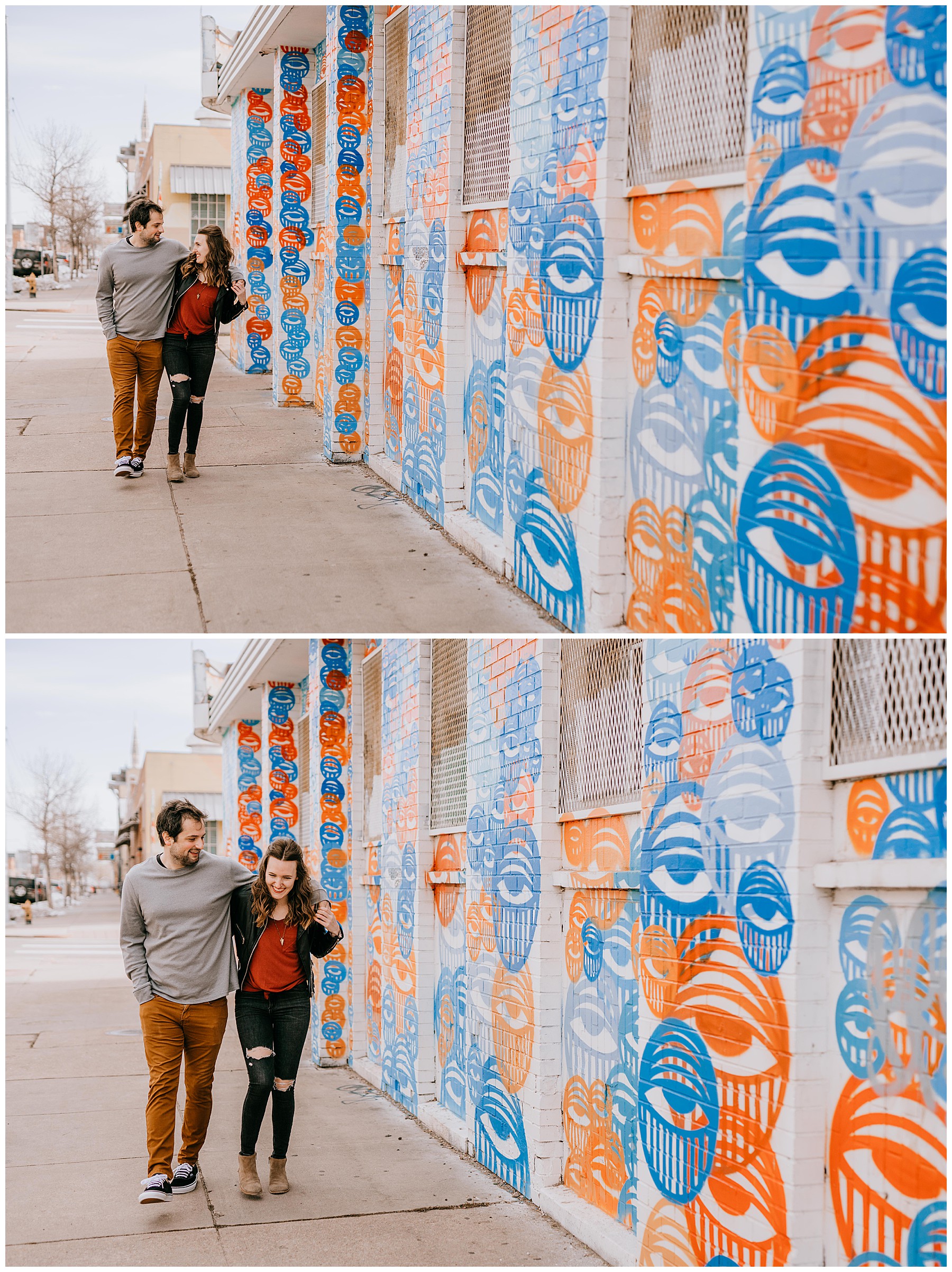 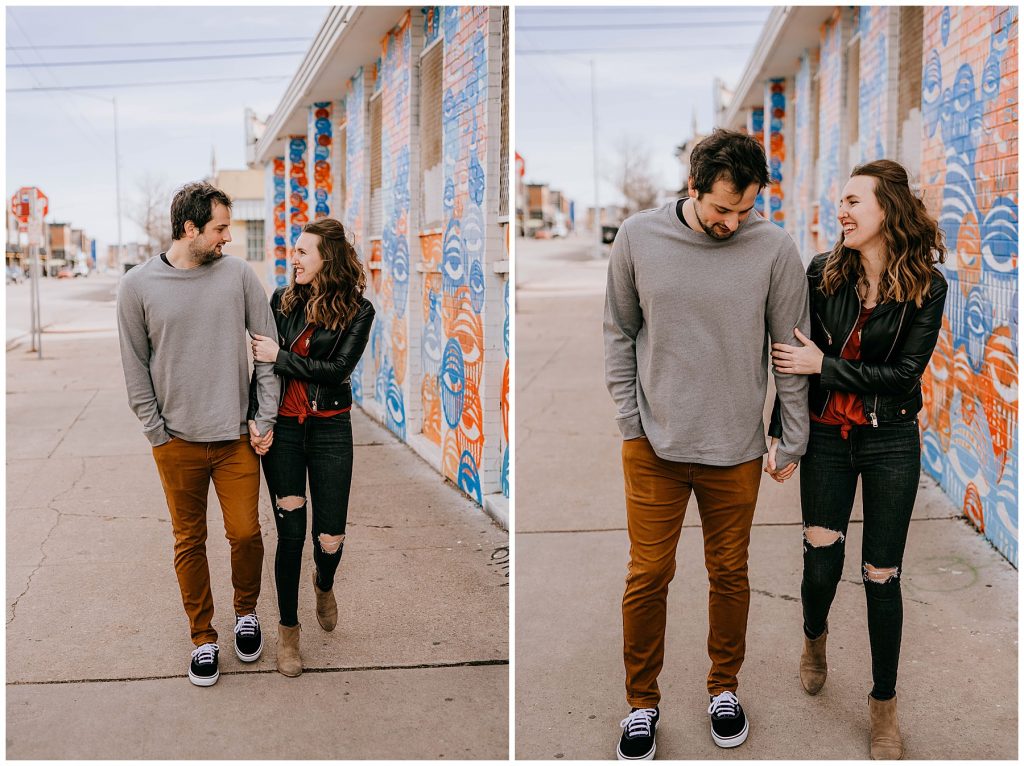 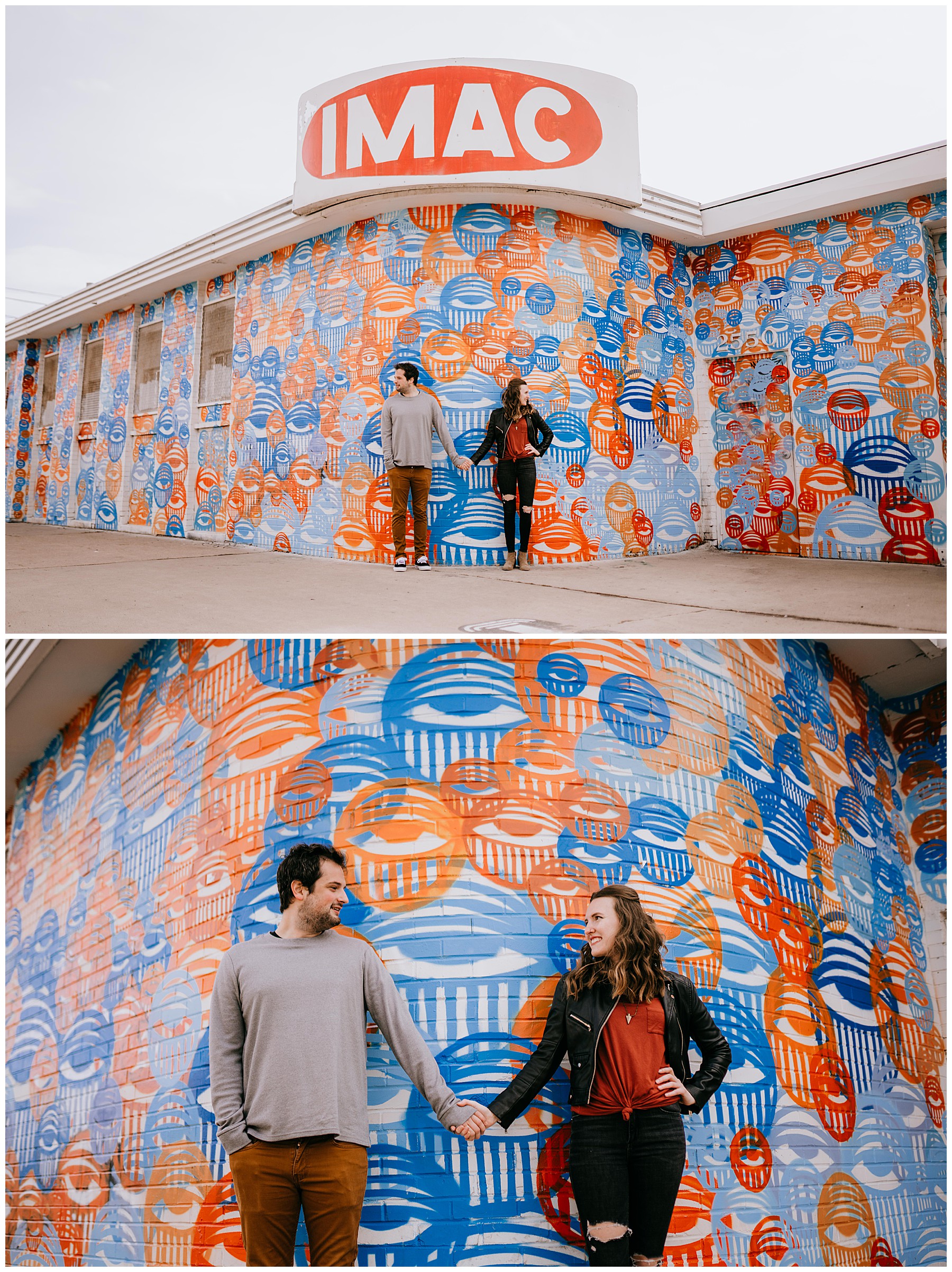 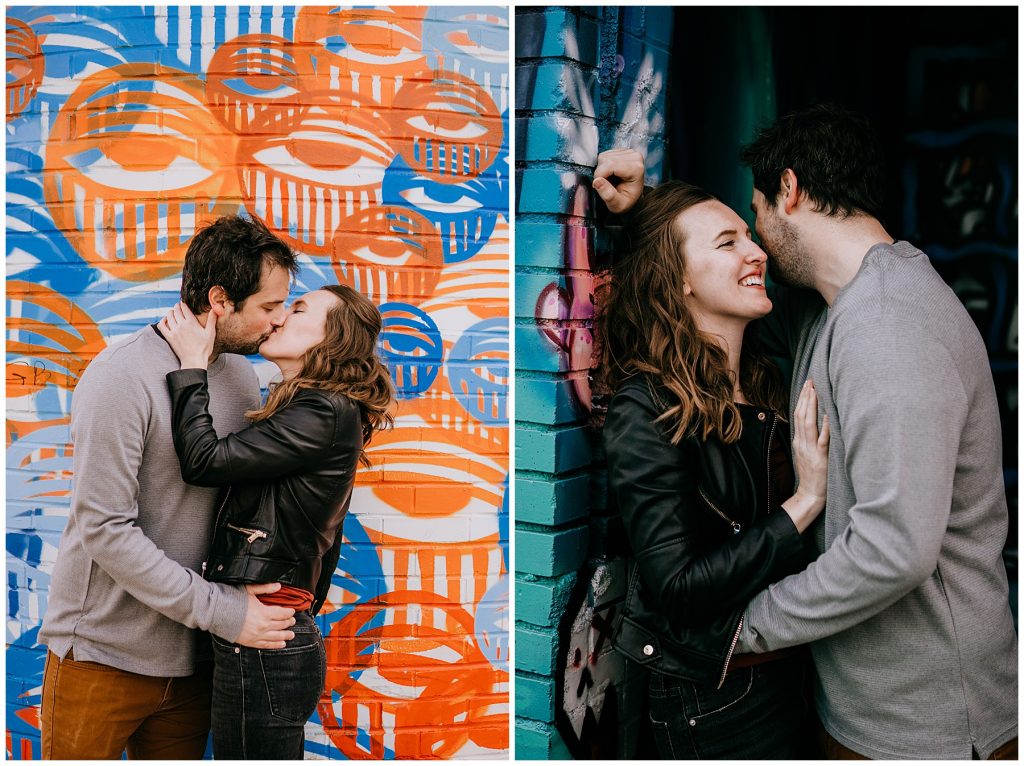 “Sam and I grew up in the same hometown West Des Moines, Iowa, right down the street from each other. We attended different schools until high school. Though I knew who he was, we didn’t officially become acquainted until senior year. We started hanging out in the early hours of the morning because I was a classified weirdo at school, and Sam was one of the cool kids, so our hangouts were secret at first.”  Engagement Session RiNo District Denver CO

“Freshman year of college in 2010, we attended different schools, but they were only 45 minutes apart, so we would still see each other when I would come home for the weekend. We went on two official dates. Then we both met other people. We remained good friends throughout our relationships, but it wasn’t until Summer 2014 that we were both single again.” Engagement Session RiNo District Denver CO

“We made plans to attend a music festival with a big group of friends. After setting up the campsite and we decided to walk around to get the lay of the land. As we’re walking, Sam suddenly stops, turns me towards him, and has our first kiss. He says he’s been wanting to do that for a long time. The entire weekend, random strangers come up to us telling us what a perfect couple we are, that we seem meant to be, how happy we look, etc. Sam convinces me to move to Minneapolis (where he was living at the time), and we start dating.”

“In 2016, Sam accepted a job offer to move to Denver, Colorado. At the time, I had just renewed my one-year lease in Minneapolis, and I was unable to move with him. We did long-distance dating for a year, and they’re not lying when they say that distance makes the heart grow fonder. If anything, it really helped us realize that we truly only wanted to be with the other. Finally, in 2017, I was able to join Sam in Denver.”  Engagement Session RiNo District Denver CO

“When we realized my studio apartment was serving more as an expensive storage place for my stuff because I was staying at Sam’s apartment all the time, we decided to move into our first apartment together. In 2020, we got engaged, and now we are celebrating forever in June 2021.” 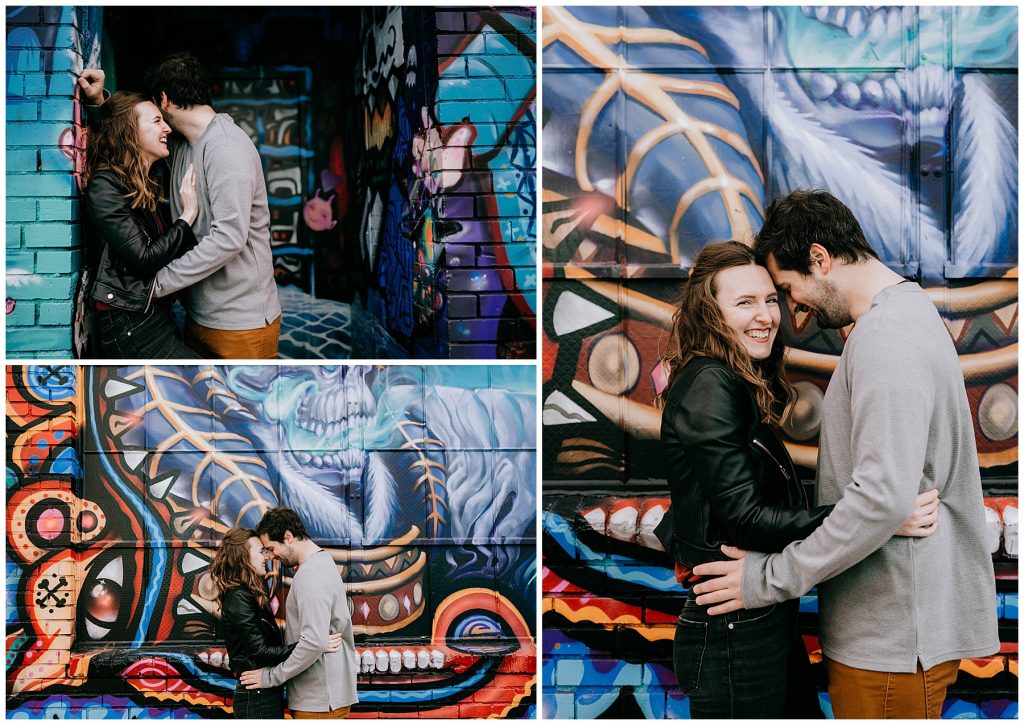 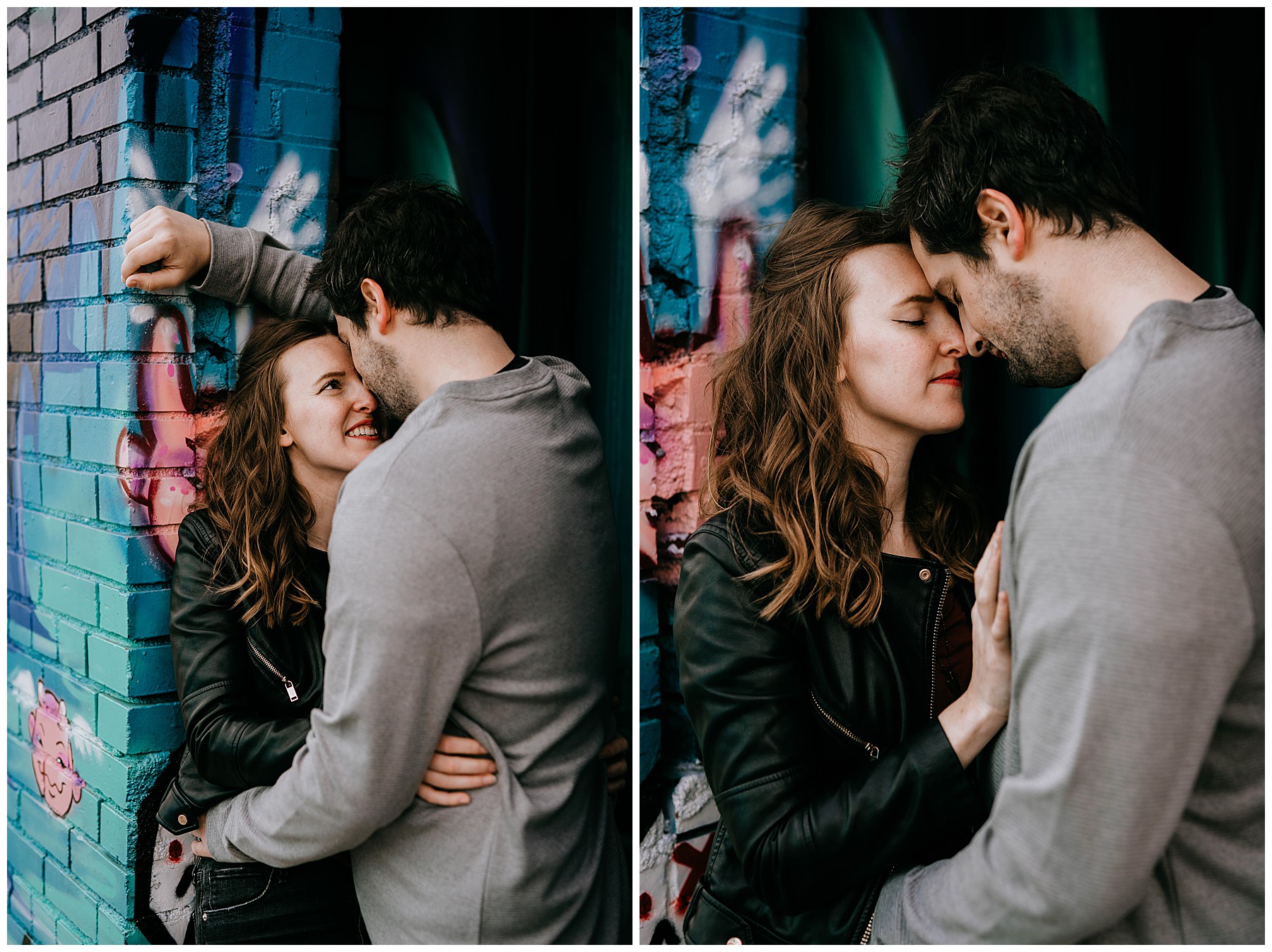 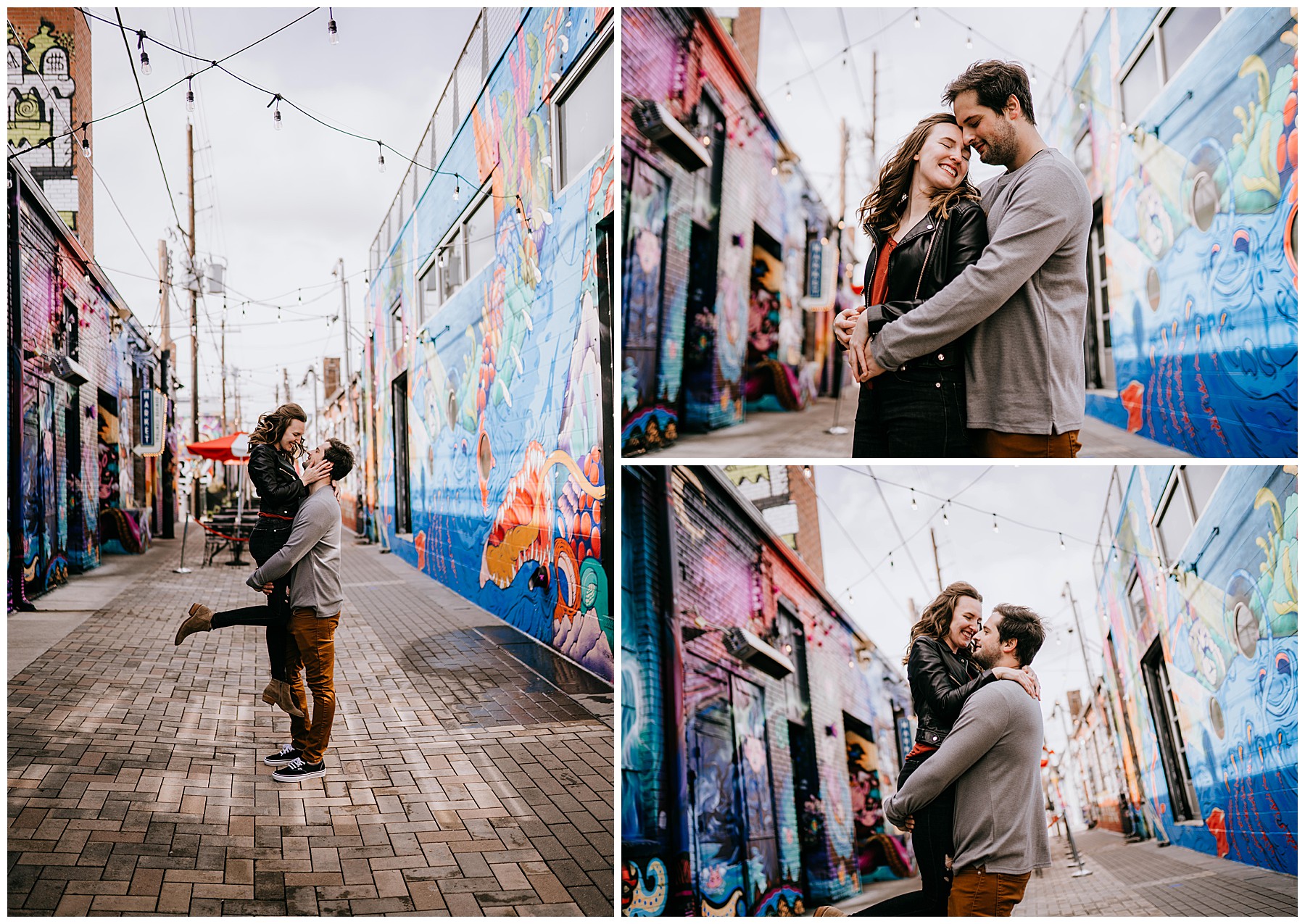 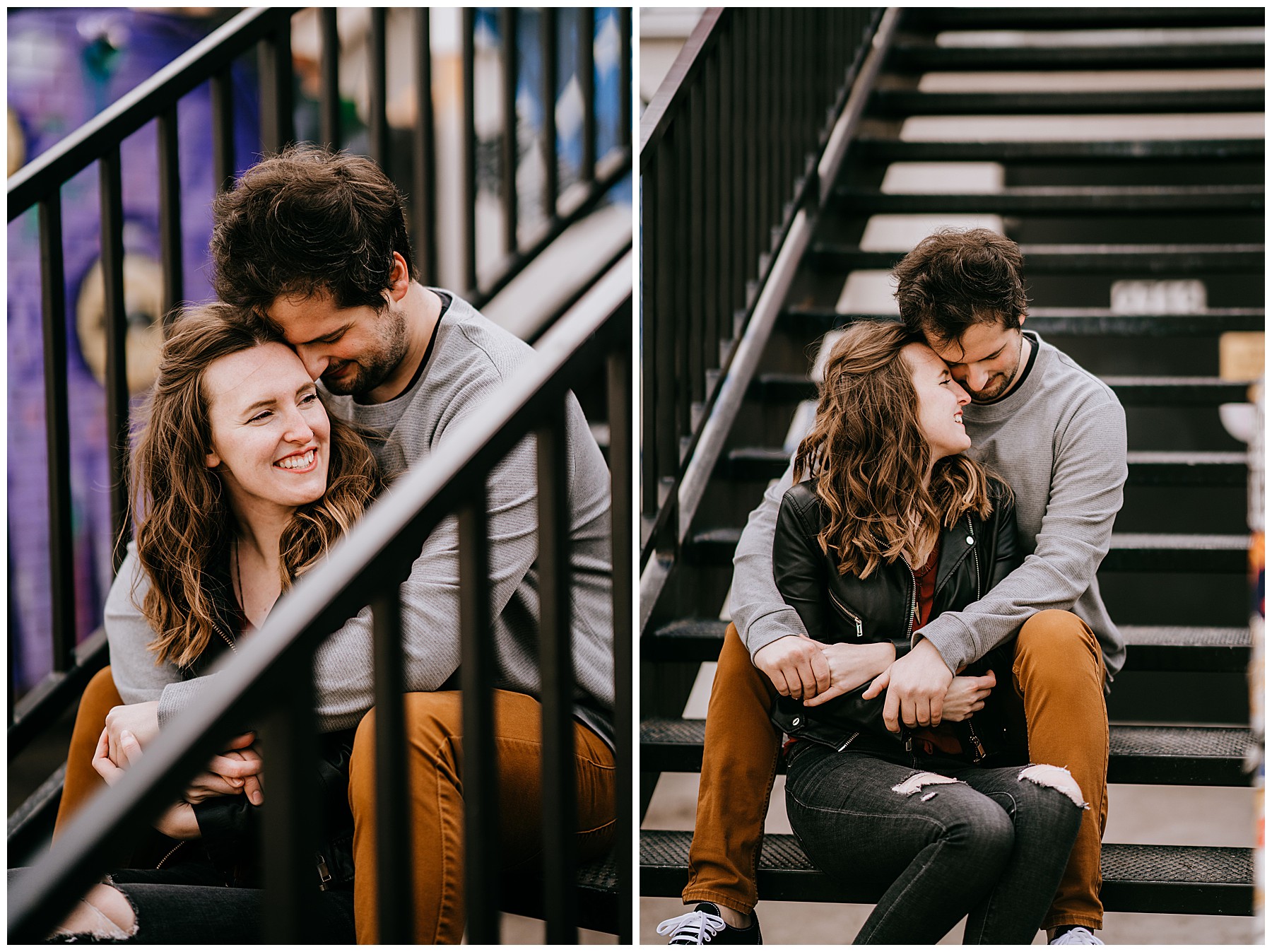 “Halloween night 2010, Sam and I were 18 years old. We drove to a graveyard in the middle of the country to ghost hunt, but we weren’t having any luck. So we decided to see a late showing of Paranormal Activity 3 in theaters to get our scare on. After the movie, we were sitting in his car talking, and right as we were about to lean in for our first kiss, a mutual friend texted us at the same time asking if we had kissed yet.” Engagement Session RiNo District Denver CO

We both made the mistake of reading the text, and it immediately ruined the moment. He drove me home, and I didn’t sleep that night, convinced the white noise* of my house meant something paranormal would happen any minute. *White noise referring to that dead silence right before they do a jump scare in movies.”  Engagement Session RiNo District Denver CO

“We started as friends senior year of high school when we would drive around in Sam’s car, and he’d play all of the new music he had discovered; I loved every song, and we really bonded over music first. We soon discovered we had the same sense of humor, and the steady conversation was so effortless. We could be talking about random things for hours at night before we would realize how late it had gotten.” Engagement Session RiNo District Denver CO

“The whole time driving around talking, I would have butterflies in my stomach, having to pinch myself that this was real because I had such a big crush on him. Sam was more reserved with his feelings and, at first, was very intent on living his life as a bachelor. But when he realized I wasn’t going to give up pursuing him, he agreed to date me. That was back in 2014, so clearly, bachelor life wasn’t that important after all.”  Engagement Session RiNo District Denver CO

“Sam likes to joke; he hijacked my birthday plans because I made all the arrangements for our little mountain adventure, so all he had to do was get down on his knee at some point throughout the weekend. During our visit to the Great Sand Dunes National Park on August 31st, 2020, he chose to propose the day before my birthday. We hiked up to the top of one of the dunes, which are a lot taller than they look once you get close!” Engagement Session RiNo District Downtown Denver CO

“I wasn’t paying attention, and he had to call my name, so I would turn around and look at him. I didn’t let him finish because I was already saying yes. I wasn’t expecting it at all, and he’s very proud of his stealthiness.”

“He proposed at the Great Sand Dunes National Park in August 2020.” 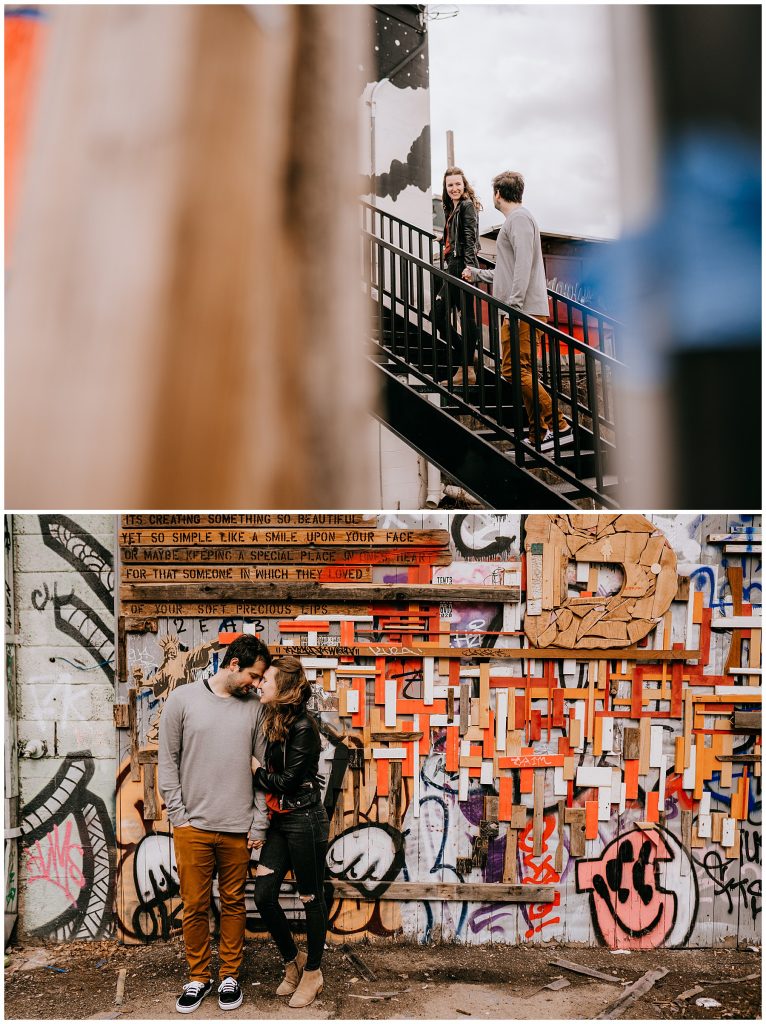 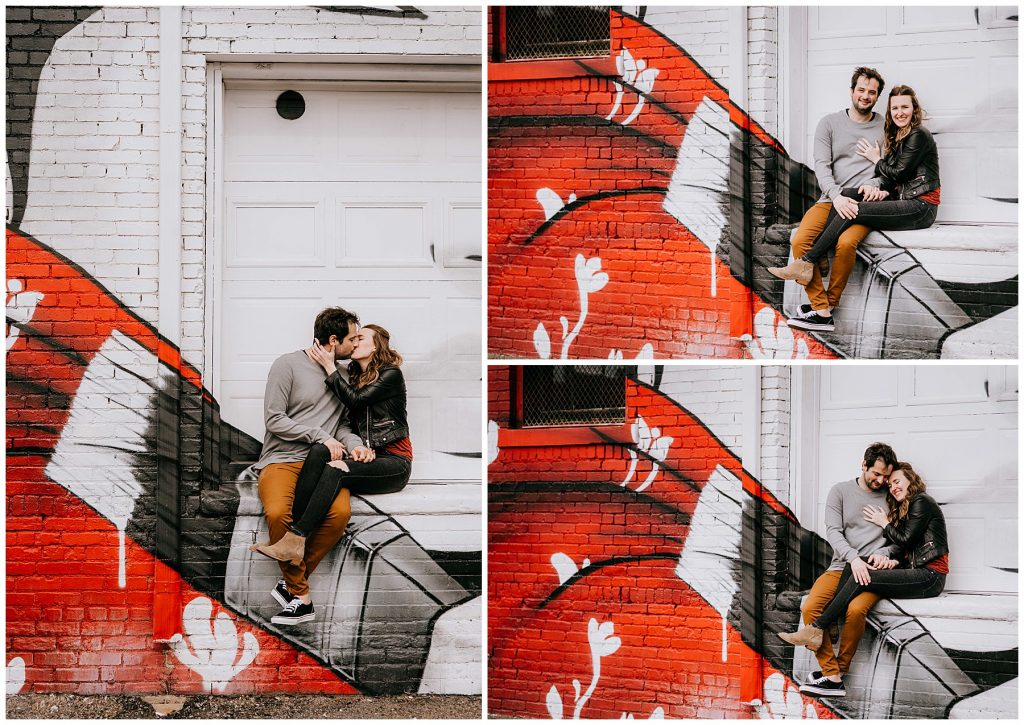 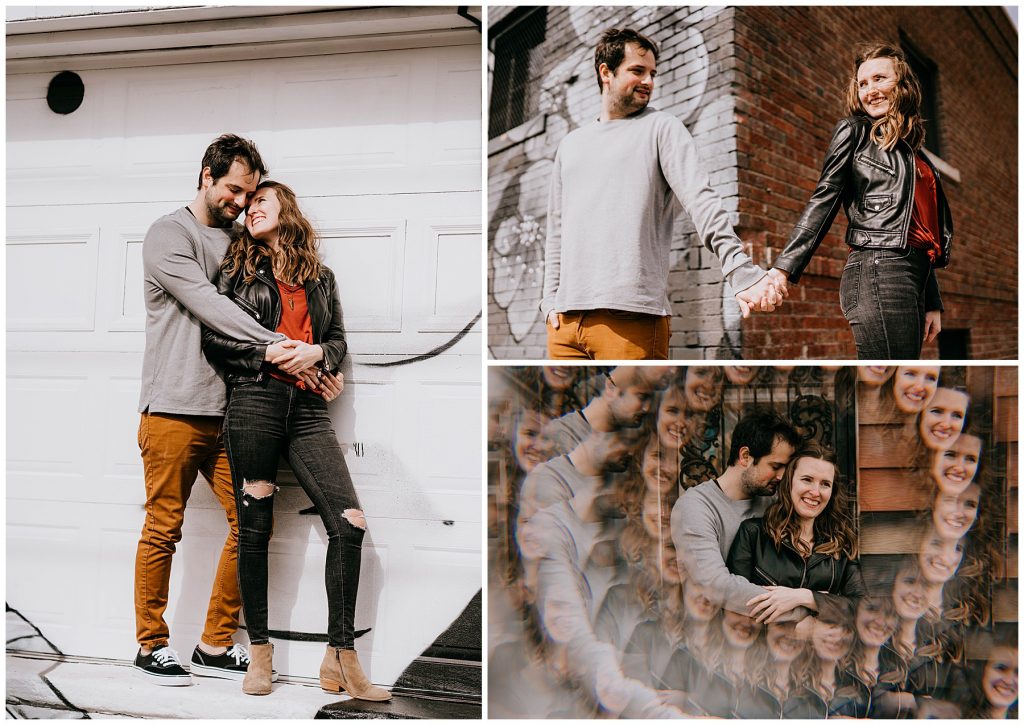 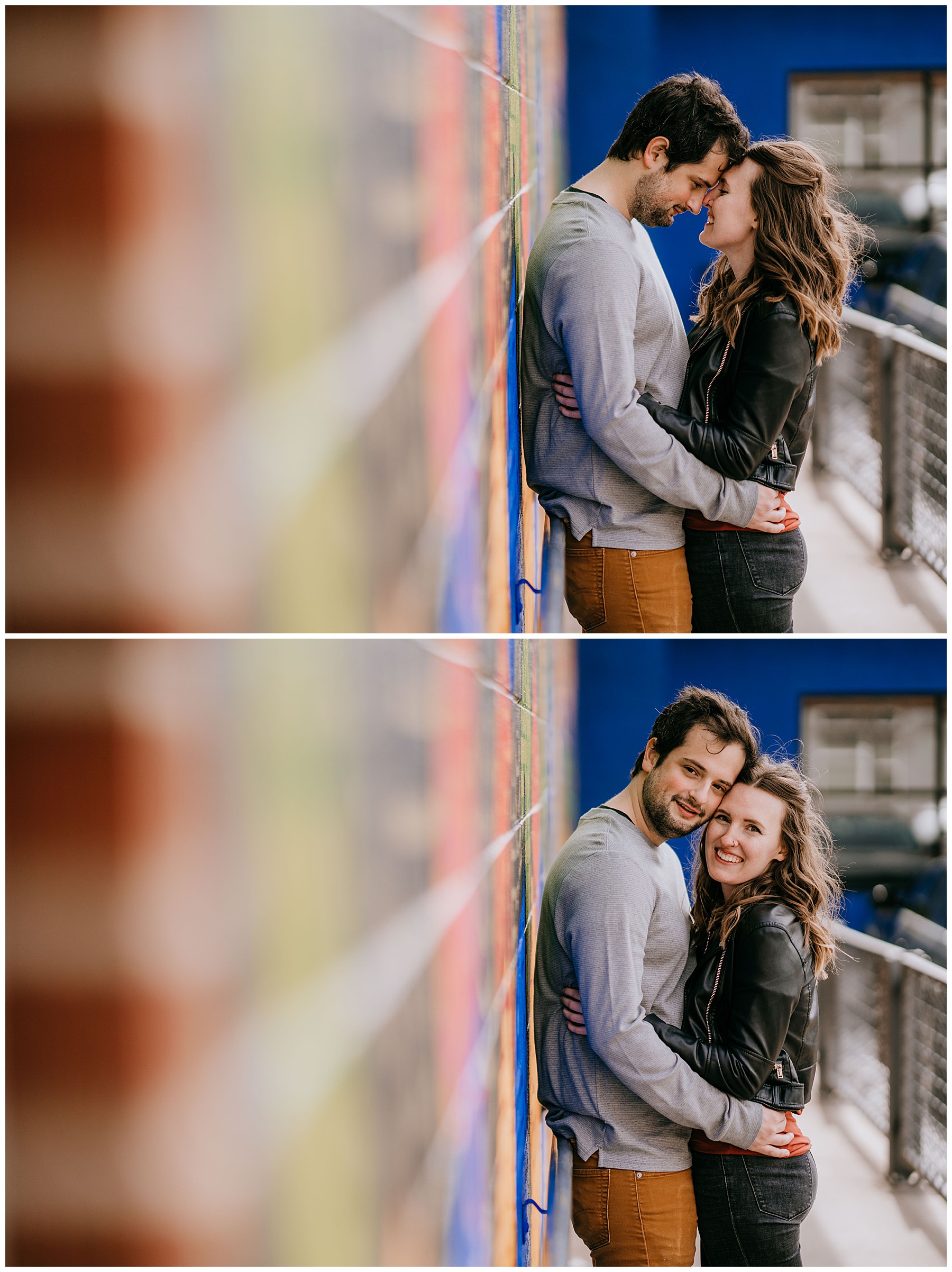 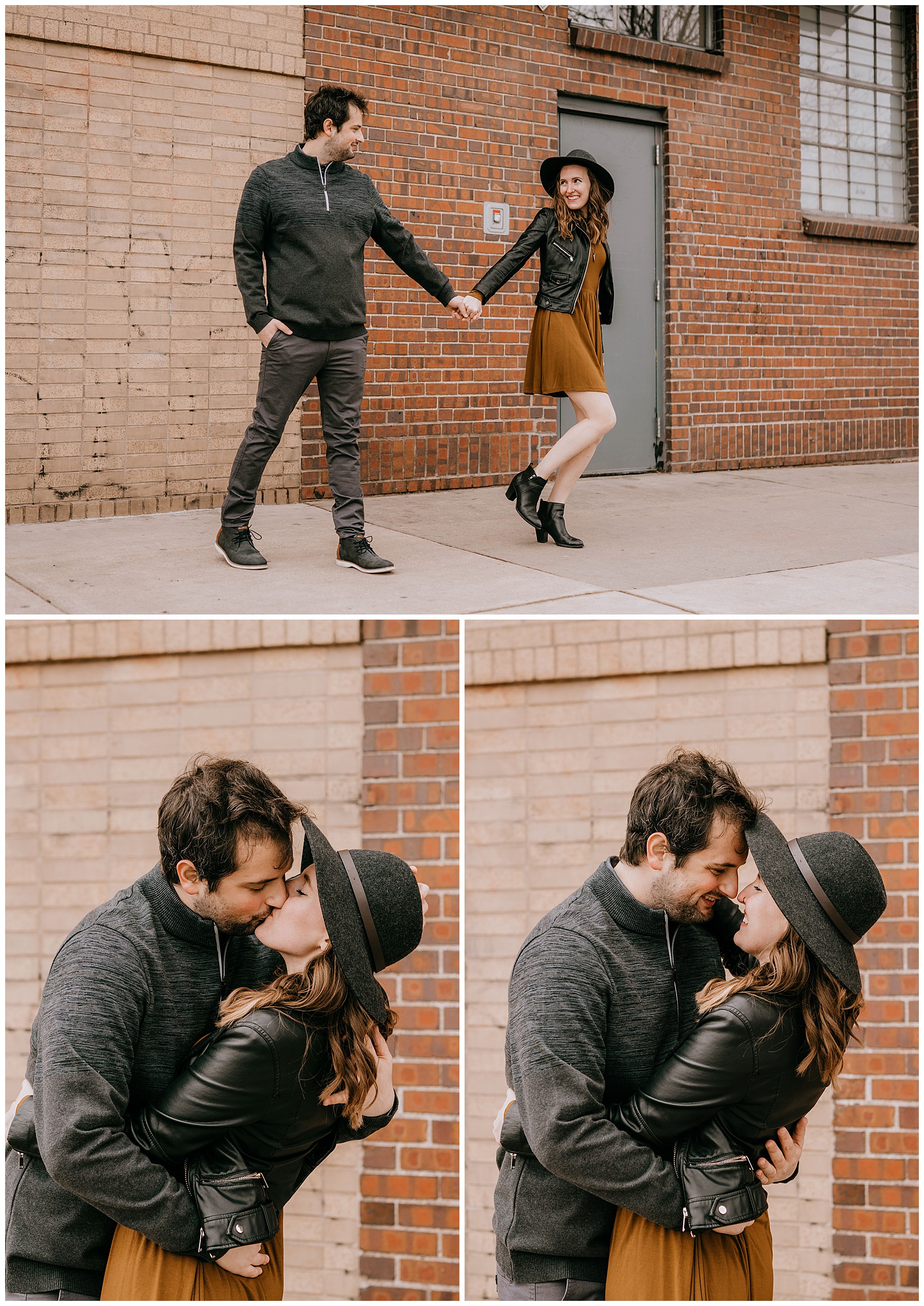 “We are both excited to celebrate with our family and friends! Sam really likes our venue, and I’m most excited about the decorating part.”

Jozie: “I love knowing I can tell him anything, and he will always listen.”
Sam: “I like that she makes me take spontaneous adventures that I wouldn’t normally do on my own.”

Sam: “We’ve matured together, from young high schoolers to loving adults. It’s not just “I/me” anymore. It’s “us/we.”
Jozie: “The long-distance part was difficult, but it really helped us learn how to communicate better. It also helped strengthen our commitment to our relationship because you don’t do long distances if you’re not serious about each other. It’s so easy to ghost and just stop talking to the other person, so it really involved both of us making time and holding space for the other.”

Jozie: “I love his excitement for all things Disneyworld and amusement parks. Taking vacations where you get to play like kids while being adults is the best.”
Sam: “I enjoy how she misuses/mispronounces words all the time.”

“Have a Harry Potter movie marathon.”

Jozie: “His hugs are so comforting. It’s hard to feel any emotion except pure love when he’s holding me.”
Sam: “When I get to be the little spoon.” 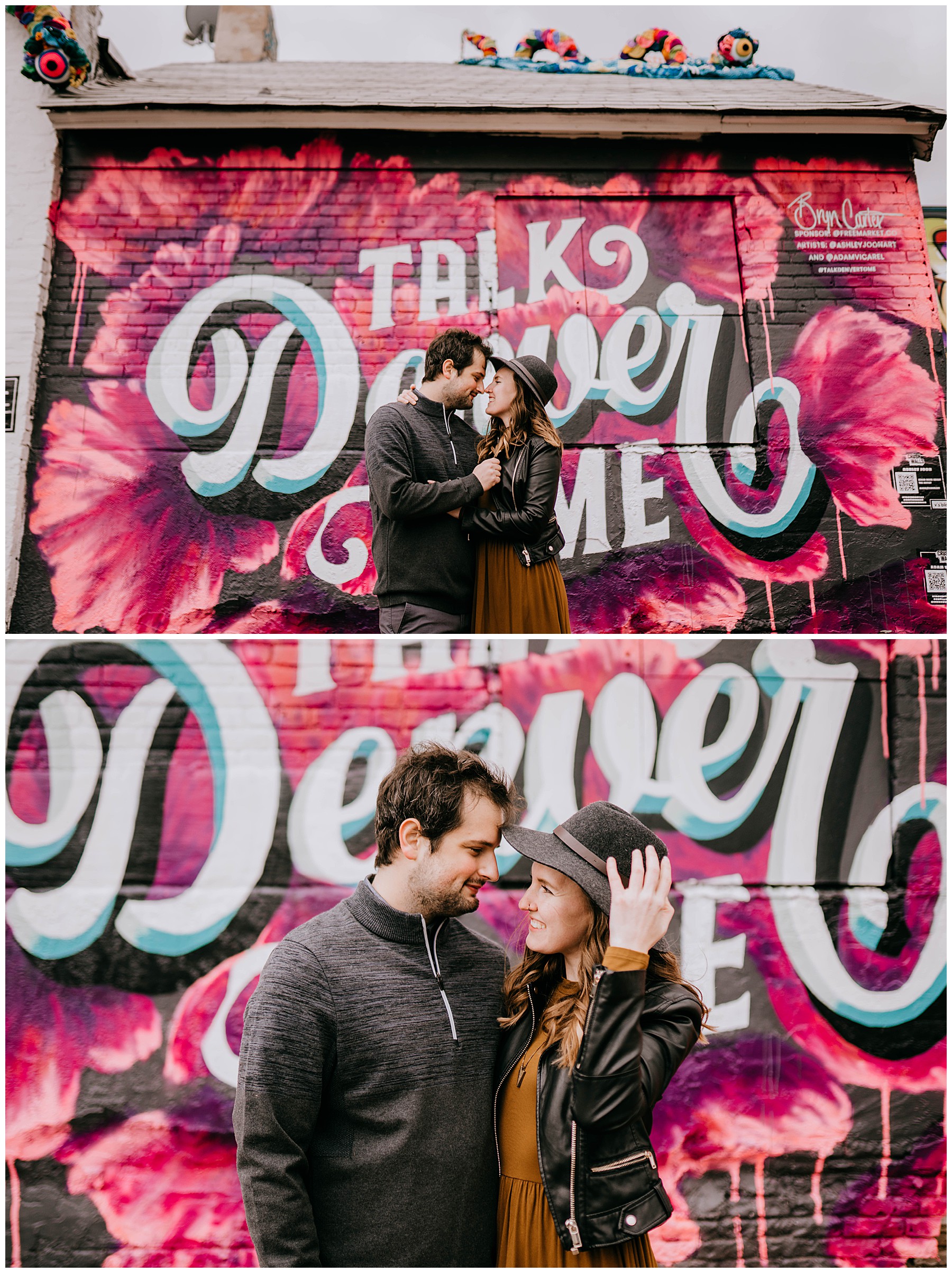 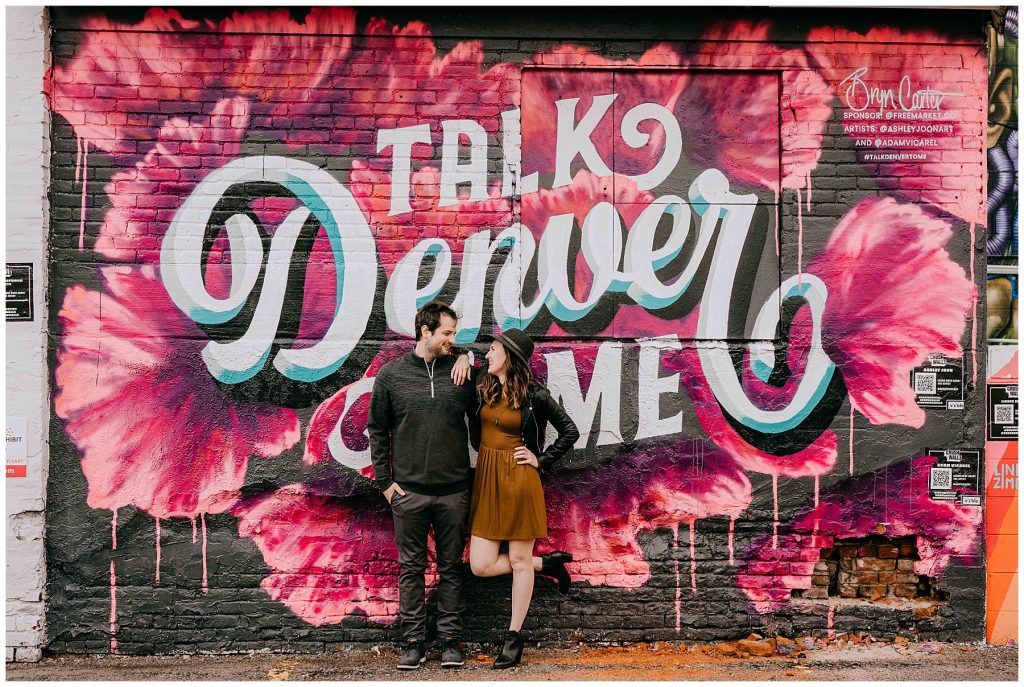 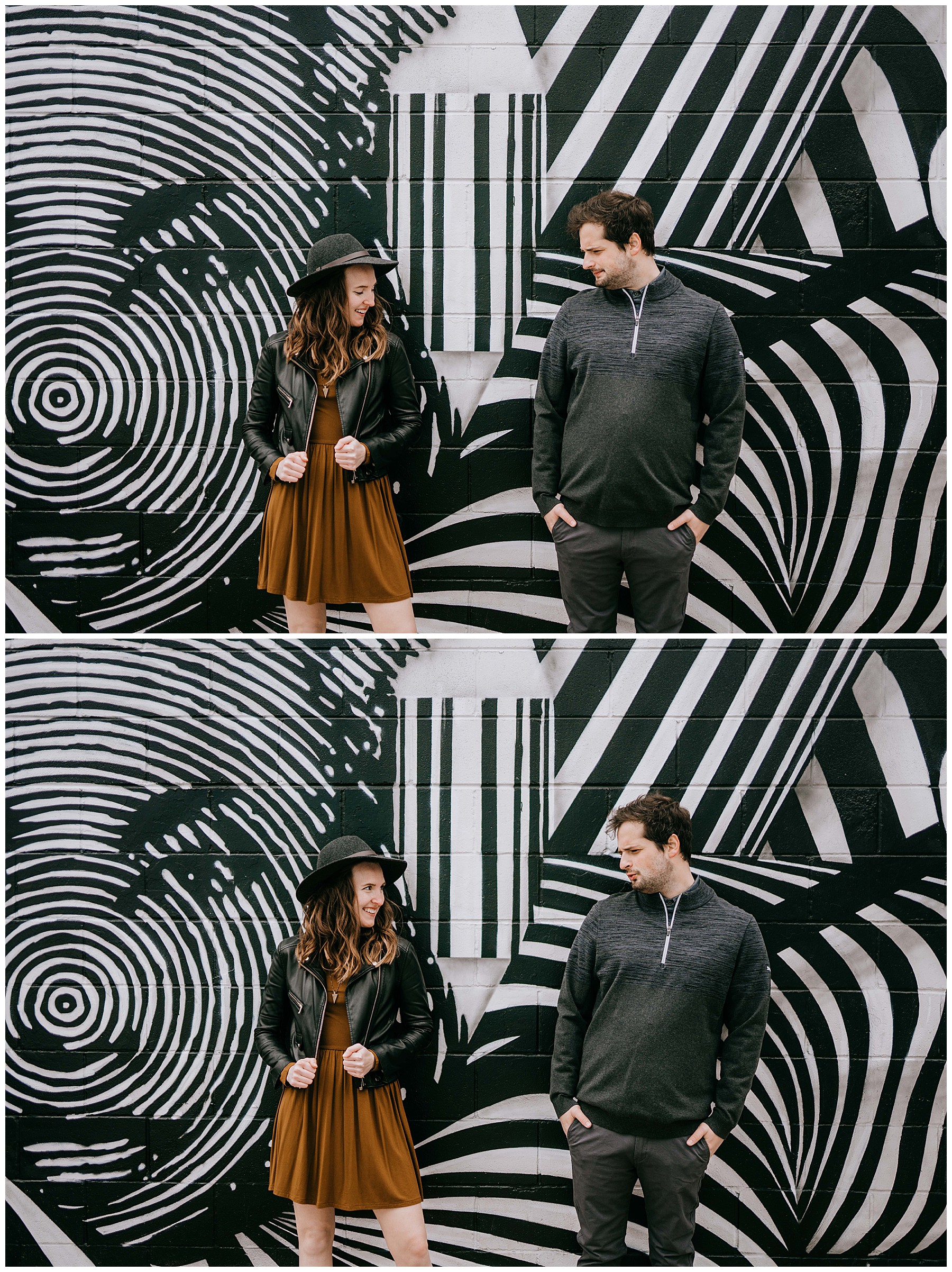 Jozie: “I wish I could play piano professionally.”
Sam: “Becoming a talented luthier to build guitars.”

Jozie: “Instant crush, he’s so attractive.”
Sam: “I thought she was weird.”

“Any combo of dark chocolate with coconut and Cherry Jolly Ranchers.” 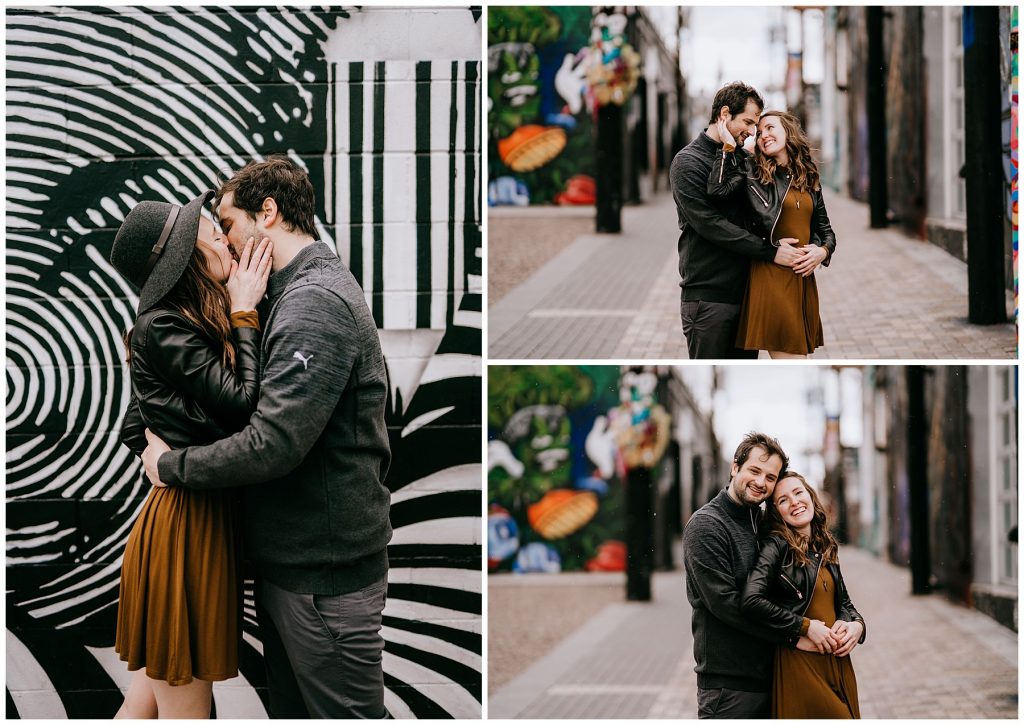 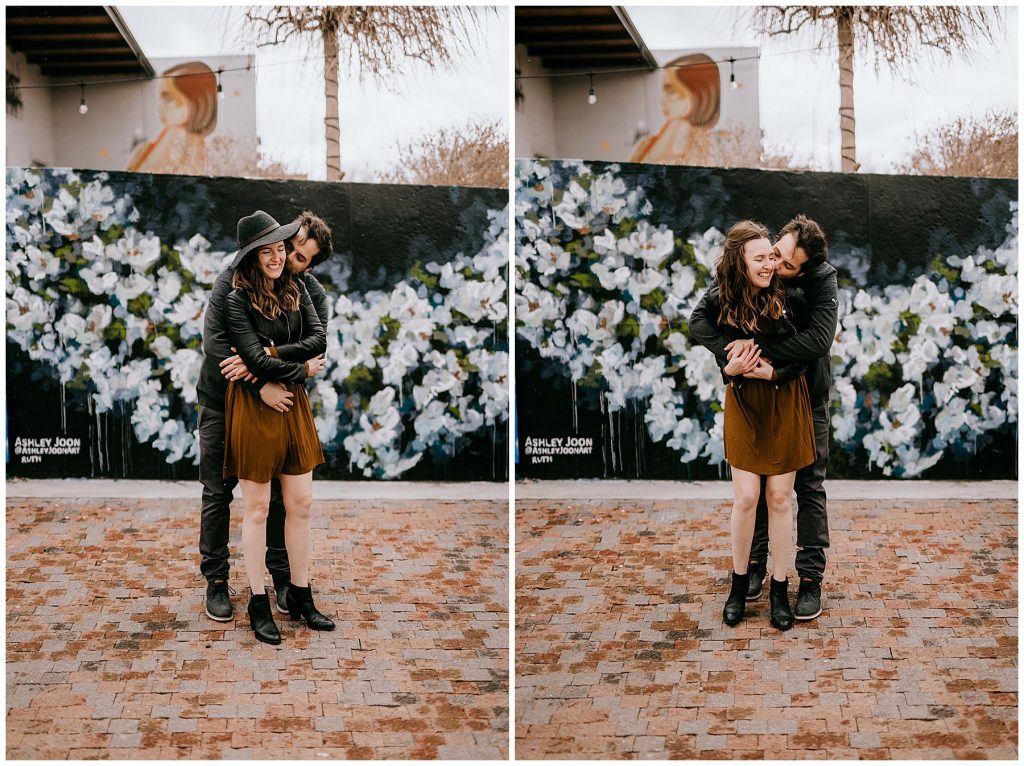 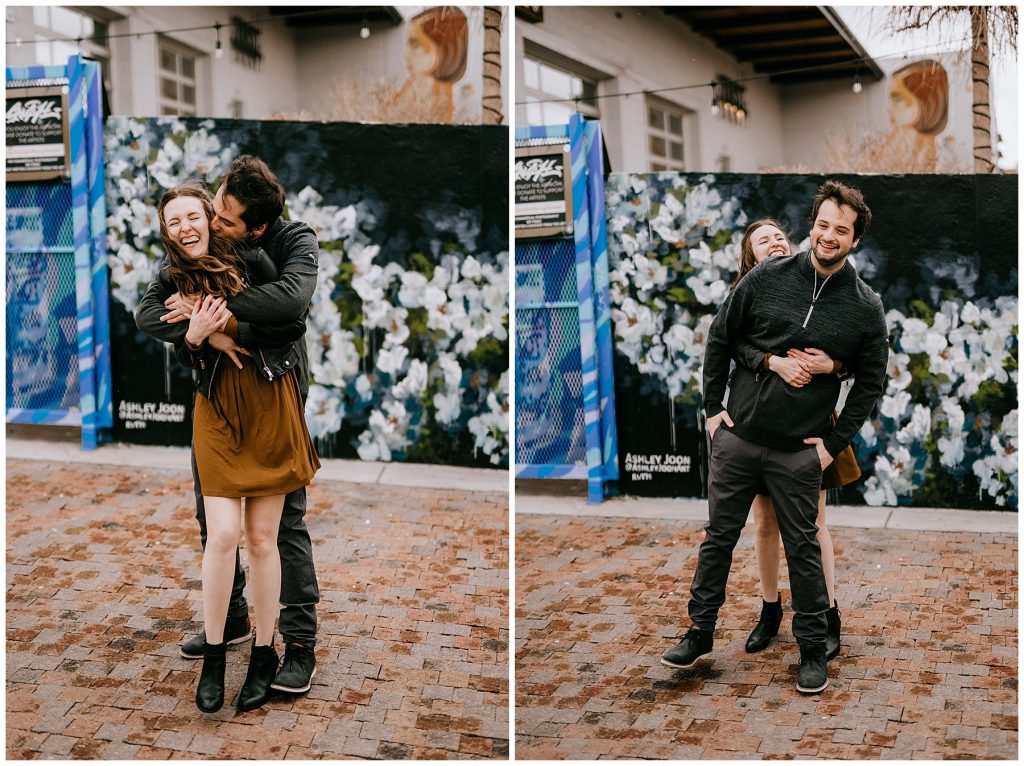