Justin and Leah’s Engagement Session Sedona, AZ, was beautiful and so much fun! Sedona truly is a beautiful place. It is large, but every location within Sedona is picturesque. Our original location was supposed to be a Cathedral Rock. Since it was spring break for all the students across the country, it was extra crowded. So instead, we went over to Bell Rock and absolutely killed it. Engagement Session Sedona AZ

Justin and Leah are the sweetest people and like to have fun!! Britt went to college with Justin and Leah, so connecting with them was really easy when we got to Arizona. You can tell how happy these two are. We knew we were losing sunlight quickly, so we had to move fast to the second outfit so that we can get the beautiful sun peering over the mountain in the photos. Engagement Session Sedona AZ

We stuck to more simple shots for this session. Leah and I connected on the music aspects of our careers. She is a full-time middle school band director, and I was a music major in college. It was cool to have that in common with her.

We all truly love working with Justin & Leah, and we are ecstatic for them to tie the knot. Thank you for allowing us to capture your love story from behind our cameras. Congratulations to the future, Mr. and Mrs. Shanley. 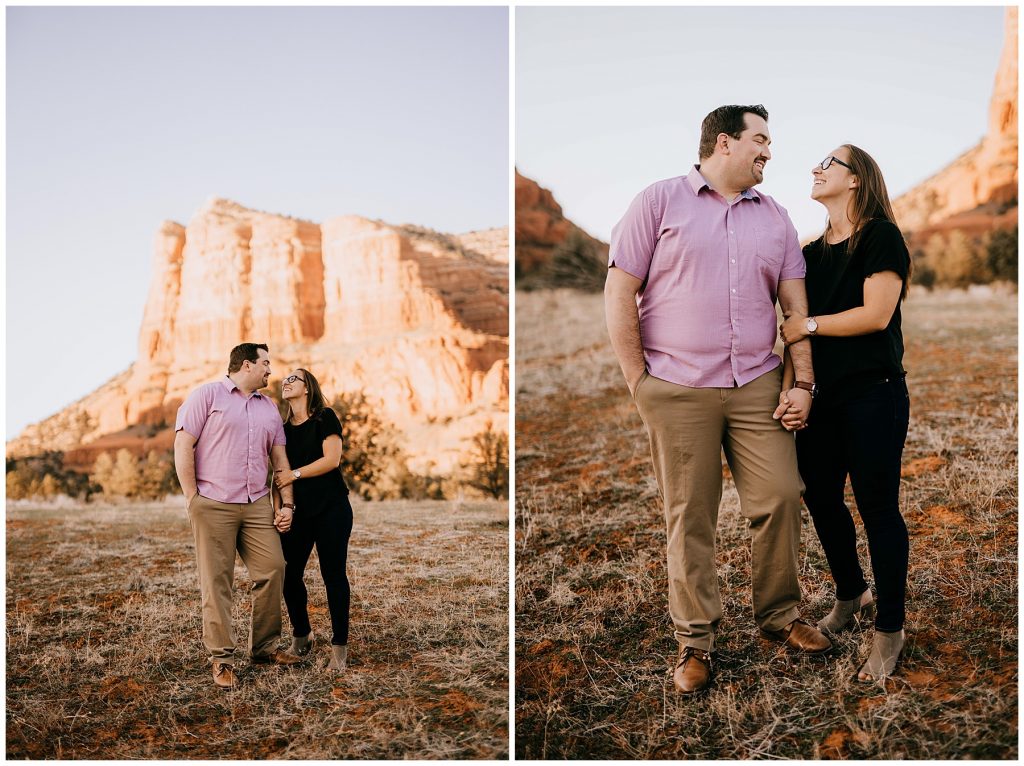 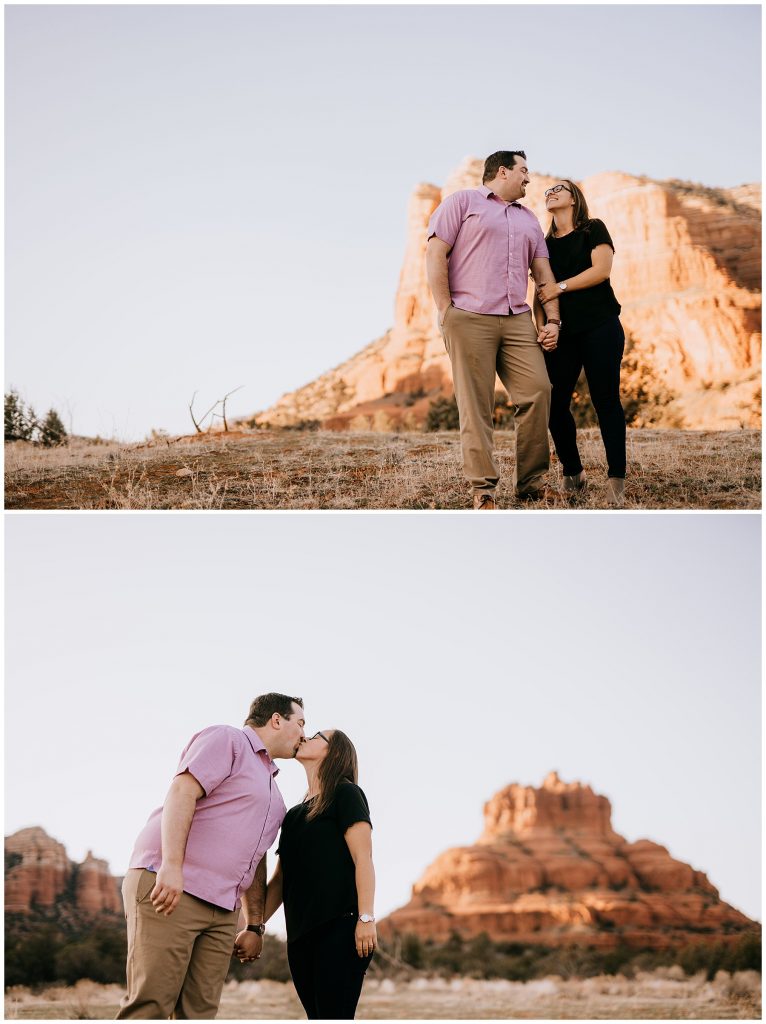 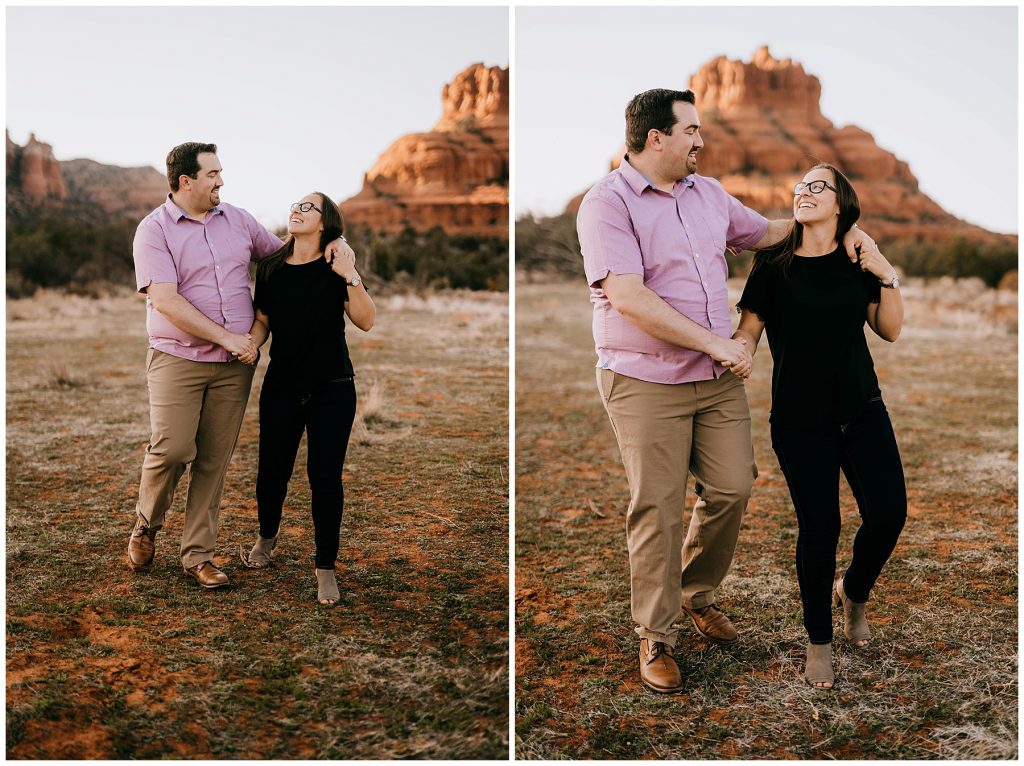 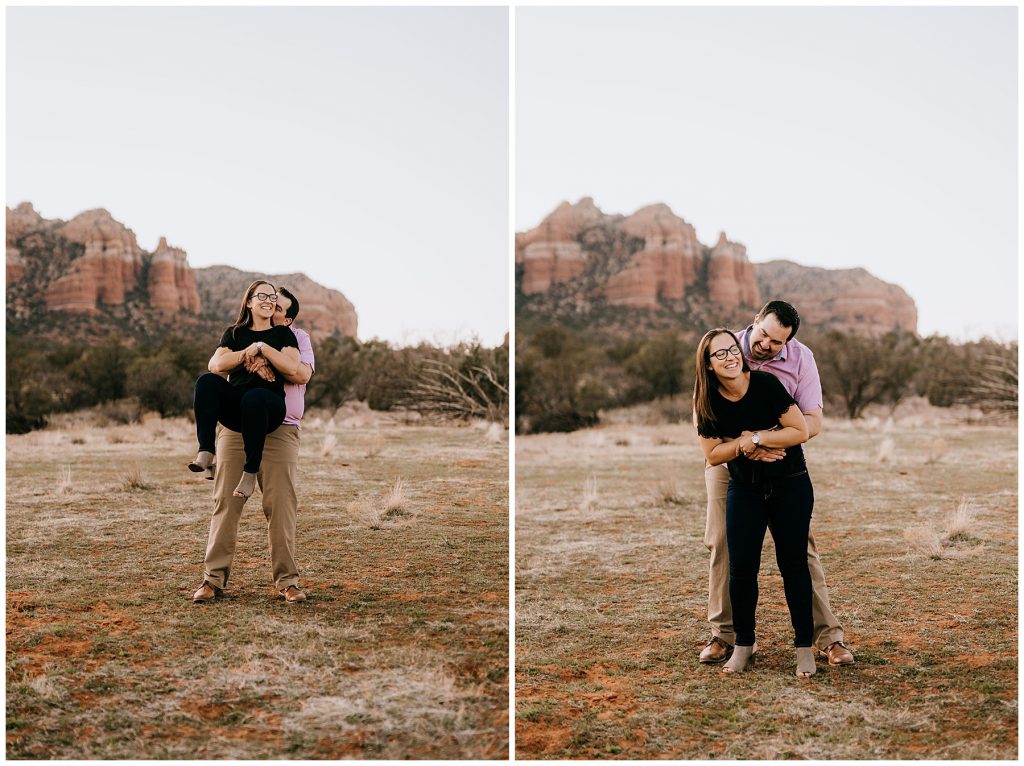 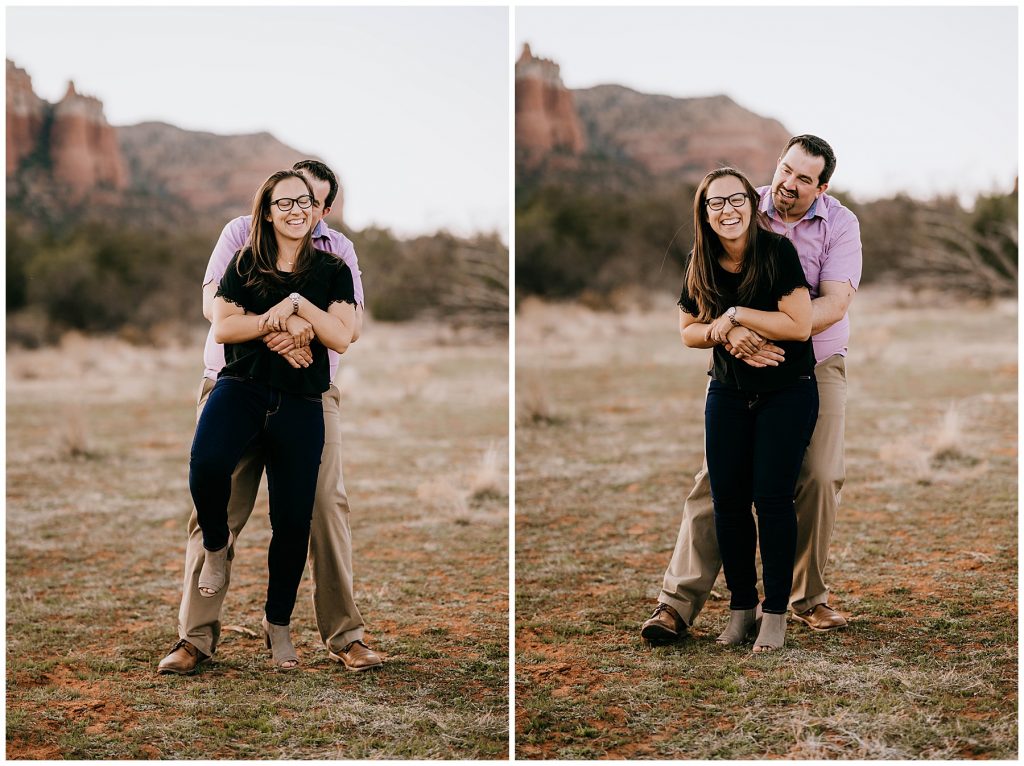 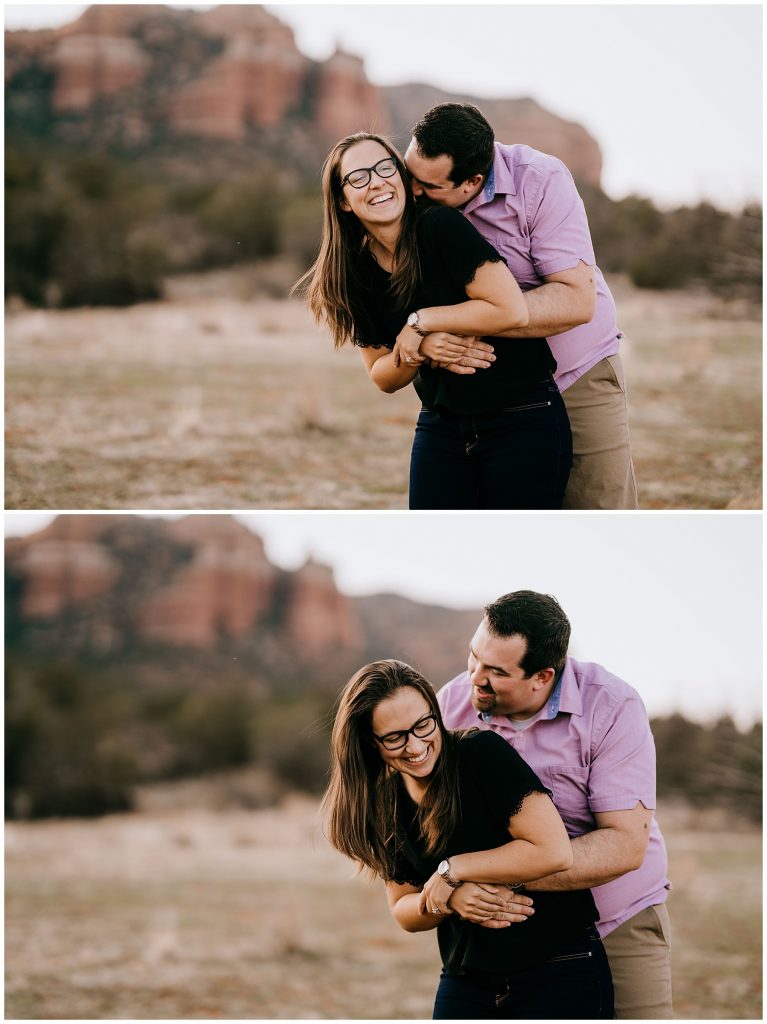 “Leah and I met back in 2011 at SUNY Fredonia through a mutual friend. Leah at the time had a boyfriend, so our friendship really went nowhere for a couple of years. I would occasionally see Leah in passing on when visiting some friends, but we were nothing more than acquaintances.”

“Not to mention with Leah being a music major and me being a political science major, our classes could not have been on more opposite sides of campus.” Engagement Session Sedona AZ

“Fast forward to the end of my senior year at Fredonia and our mutual friend (whose head would explode for me giving her this much credit) decided to attempt to set us up by bringing Leah and another friend, Kelly, over to my house on Temple St. during FredFest weekend.”

“One thing leads to another, and Leah and I decided to go out on a couple of dates after that — taking advantage of the only few weeks left at Fredonia before we would go our separate ways.”

“Well, one date lead to two, and two lead to three, and before we knew it, Leah was coming to my parent’s house post-graduation and met my entire family (that’s when I knew she was a keeper–not many people would’ve stuck around after that!).”

“We went out for drinks and dinner! Very laid back. We talked a lot, and really, this was the first opportunity we had alone to get to know each other.”

“Hmm. This is a tough one. For me, I really fell in love with Leah during the summer/early fall after we started dating. It took a few months because we actually had just started dating and then almost immediately went back to our own sections of the state with me in Buffalo and Leah in Syracuse.” Engagement Session Sedona AZ

“We made sure to see each other every couple weeks, whether she traveled to me or I traveled to her. But after a couple of months of that, I received word that I had been accepted to grad school in Albany.”

“So, with me in Albany and her finishing up her senior year in Fredonia (literally opposite sides of New York State), we knew it would be tough. But we made it work! Lots of time either spent on the train or driving I-90 through the night after weekends spent together.”

“Lots of traveling from Albany to NYC and just galavanting all over the state. It was really then that I realized Leah was the one for me. Not many people would make a new relationship work being so far apart after only dating for a short time, but with Leah, it was almost a no-brainer.”

“Something we didn’t even have to think about. We’re two very similar-mannered people, but our personalities and interests are opposites, and that’s how we make it work. And now, near 7 years and two states later, and a French Bulldog later, I know it was all worth it.” 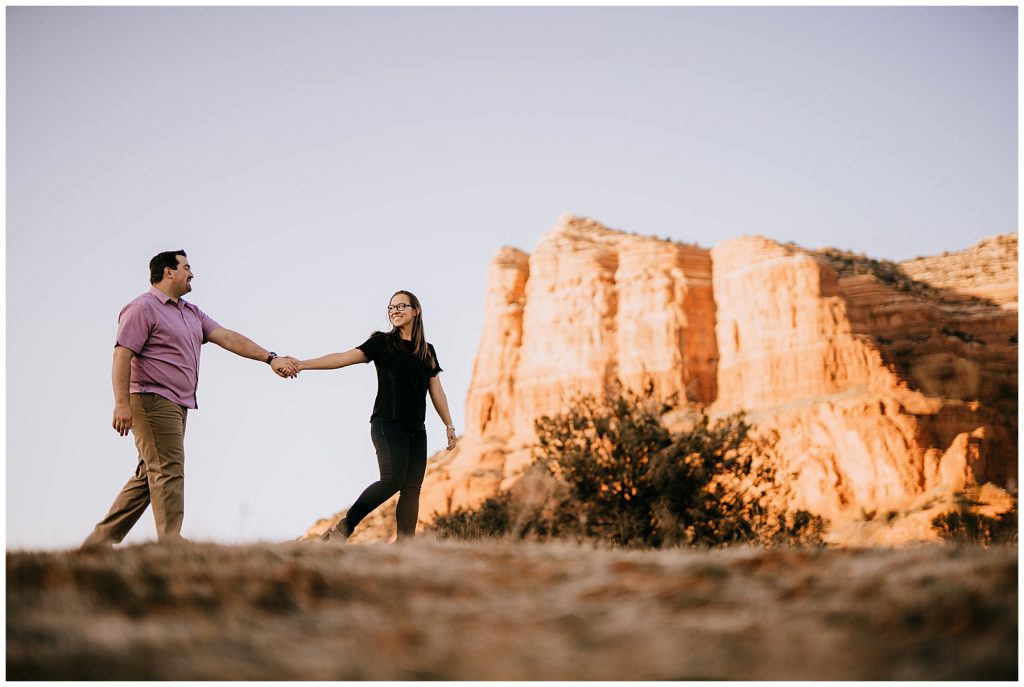 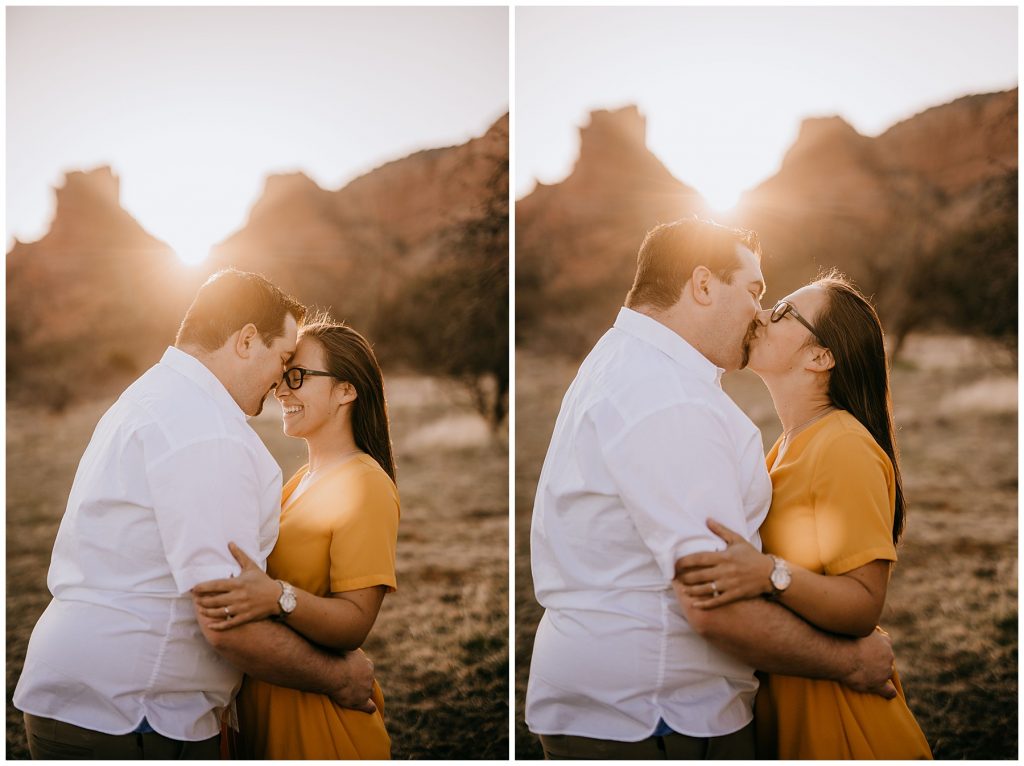 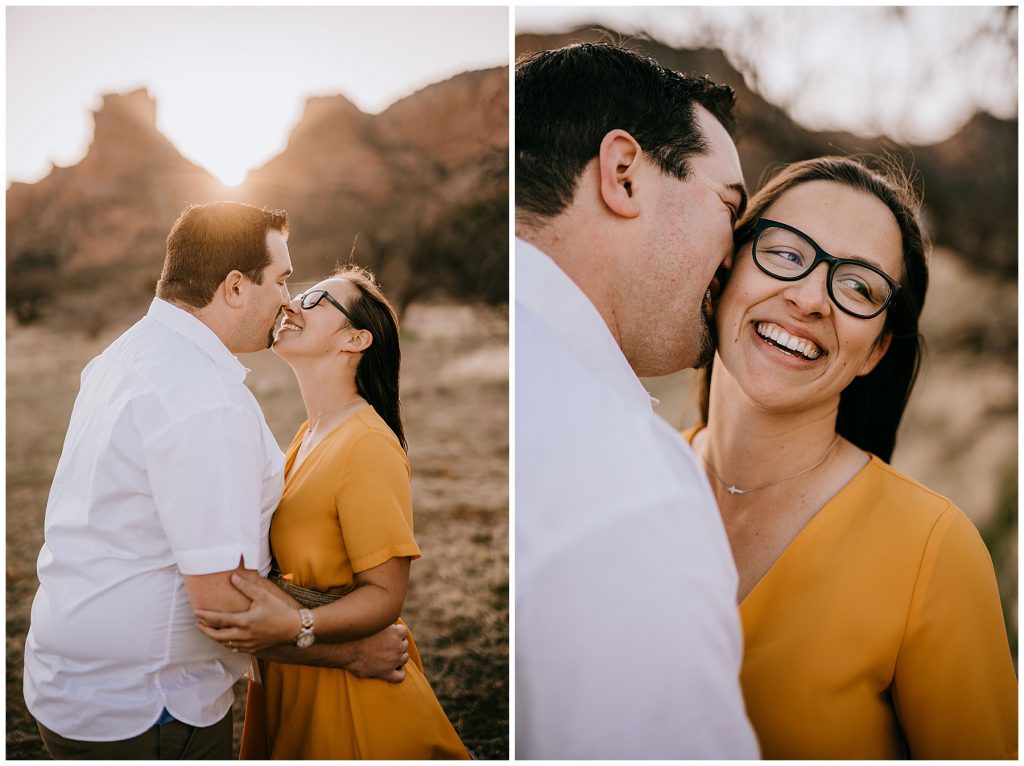 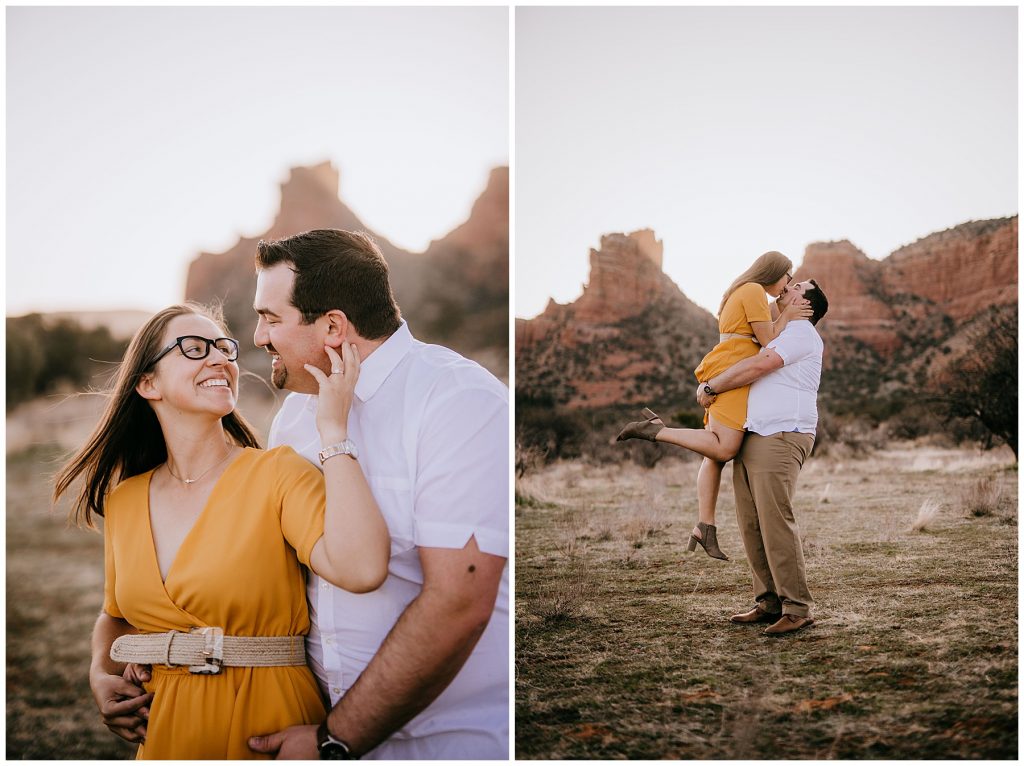 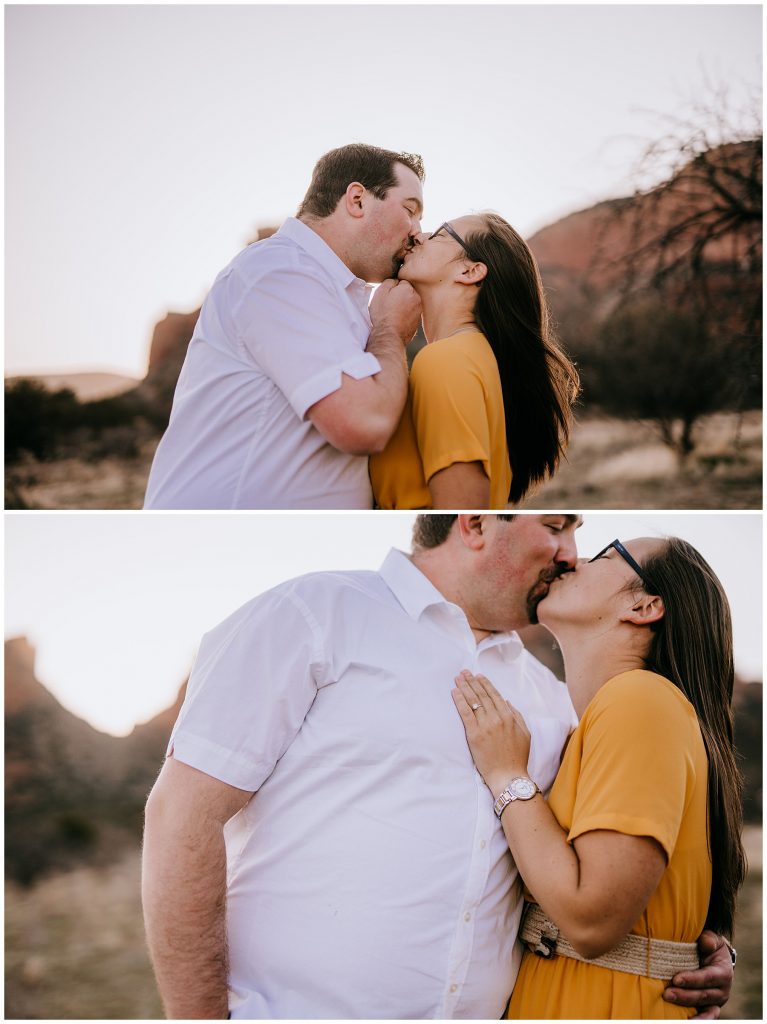 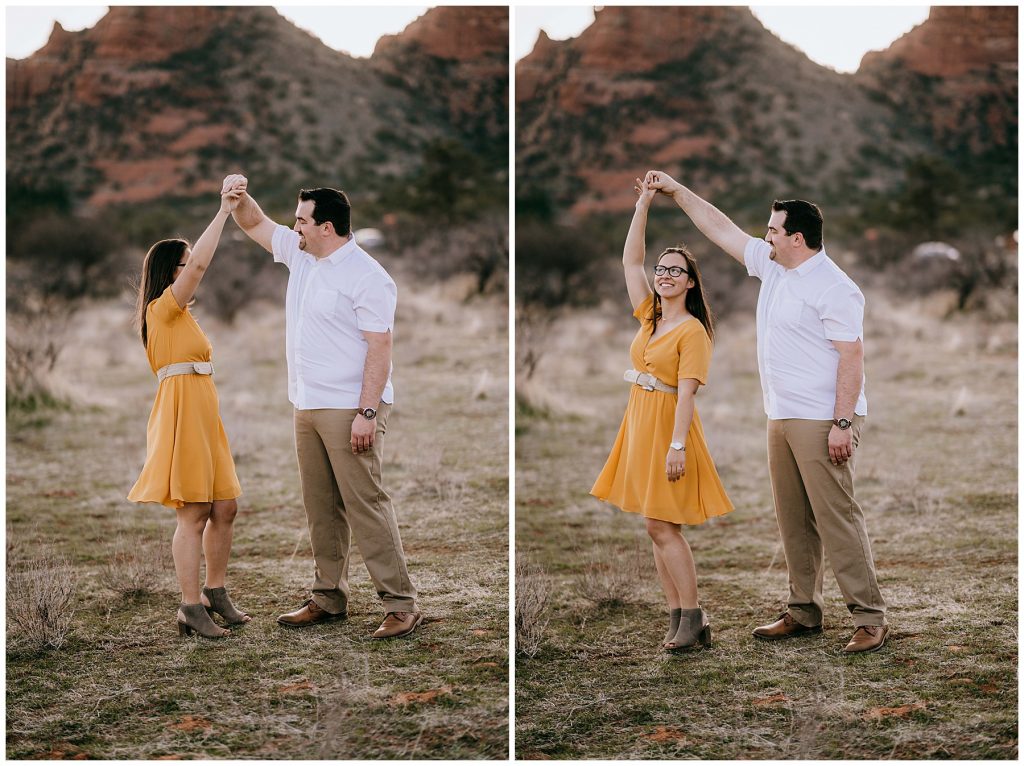 “So this story has a few twists and turns as we’ve had to accommodate a few hiccups in the planning. Originally I had planned to do it sometime in the late Summer / early Fall of 2020, so I thought Labor Day Weekend!”

“Okay, great, now that we had the date, where was it going to happen? With Covid happening, I knew traveling would be interesting, so I chose somewhere we could road trip to. After a few weeks of deliberating, we decided on San Diego, CA. We had never been to San Diego, and I knew we wanted to escape to the beach from the godawful Arizona heat.” Engagement Session Sedona AZ

“So the second day we were there, I had planned to propose at Sunset Cliffs on the beach. Well, wouldn’t you know a massive wildfire burning south of us cast this thick grey smoke throughout the sky (literal ash was raining down from the sky…it was bad), so plan A was ruled out?

“I then thought, okay, what about a walk on the beach later after dinner…nope, someone was too tired from walking all day, so plan B was ruled out.” Engagement Session Sedona AZ

“Plan C, I thought, was the clear winner anyway. On the last day of our trip, we started at Balboa Park in San Diego. I planned to walk around the Japanese gardens and find a perfect spot that I had seen so many pictures of online. So we went to the park early in the morning (around 8 am as we were planning on hitting the road around 10 am to get back in time to pick up Gus from the sitter).” Engagement Session Sedona AZ

“Well, wouldn’t you know that the Japanese gardens didn’t open until 10 am…..UGH. At that point, I was considering taking an “L” and heading back to Phoenix.”

“But I decided to walk around the park and scope out pretty areas. There was the rose garden area, another smaller type of performance space, beautiful buildings, and finally, this beautiful fountain tucked away on the side of this building. I thought — perfect! Now we just had to get an excuse to go back there.” Engagement Session Sedona AZ

“Well, at this point, I think I had said something along the lines of “let’s go take some pictures at this place I saw. It’s on the way back to the Jeep.” So Leah, in her typical oblivious state, said okay!”

“We found the fountain, and it was the perfect setting. I told Leah to turn around because I wanted to get a picture of her looking at the building/fountain — simultaneously, I was trying to prop my phone against the wishing well to record the moment.”

“Well, my phone almost fell in the wishing well, and we didn’t capture anything — BUT! — I was waiting behind her, on one knee, with the ring out, and she was so caught guard that I think her scream of joy could be heard across the massive park. It really was a beautiful moment! One that now we’ll only have…” 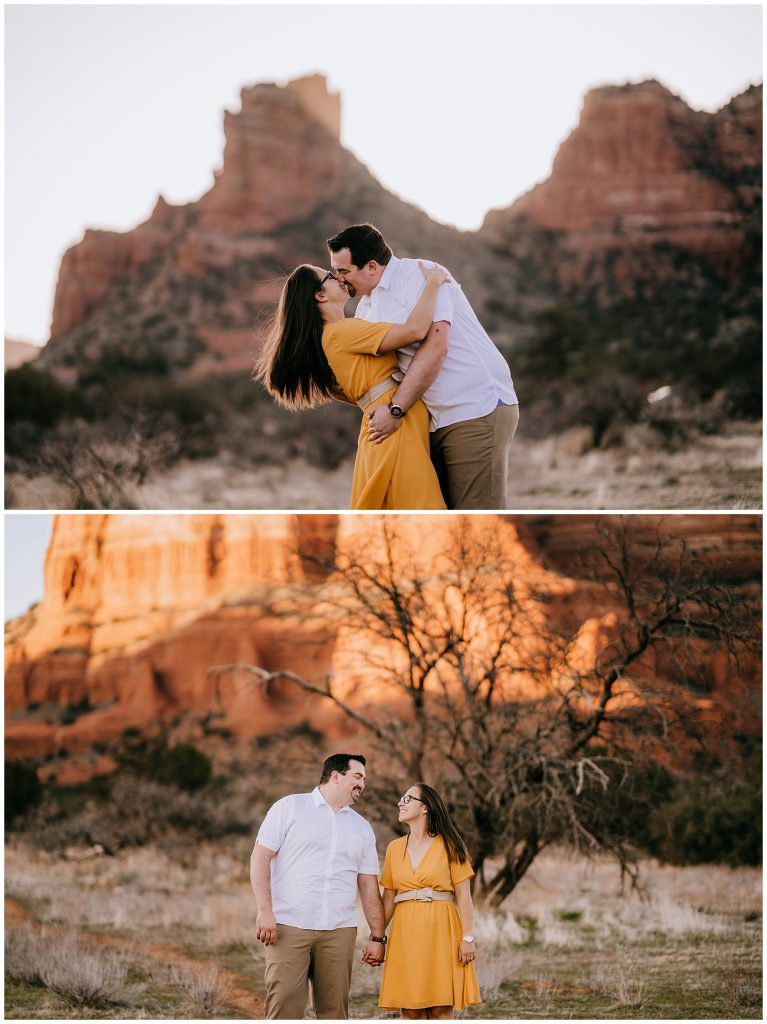 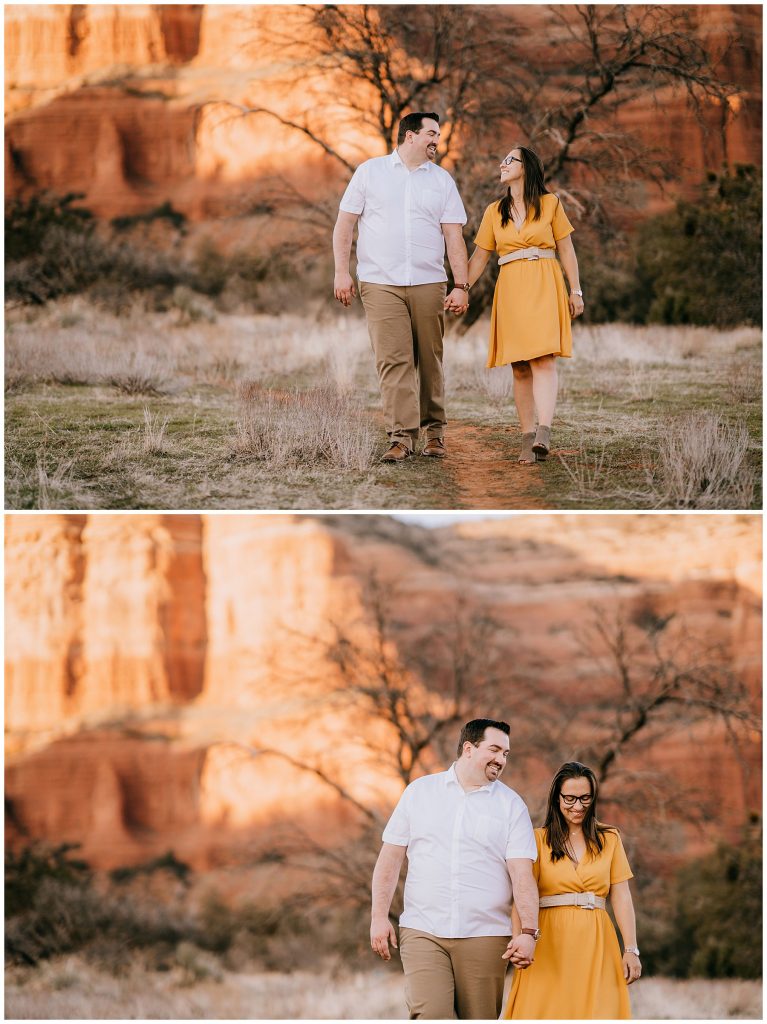 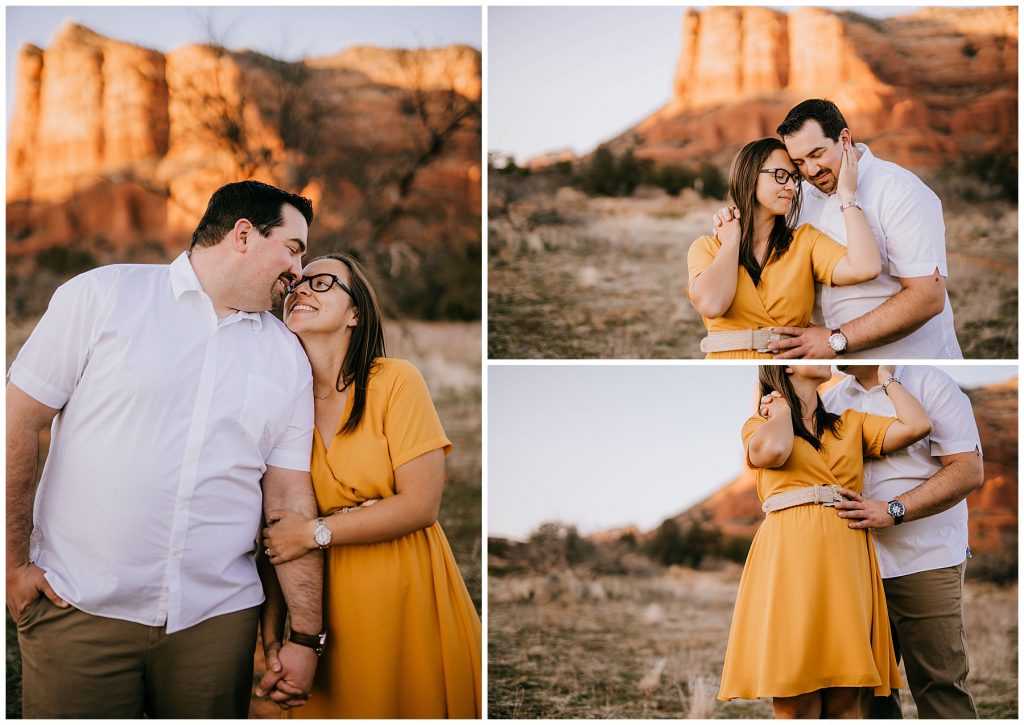 “For all of our friends & family to be together for the first time in I don’t know how long.”

“This one stumped both of us.”

Leah: “My favorite thing about [Justin] is his humor and ability to make me laugh no matter what happened in my day”

Justin: “My favorite thing about Leah is her passion. She is an incredible human who cares about others so much, and I love that about her. ”

Justin: “I think I’m definitely a nicer person since we started dating”

Leah: “I’m definitely more of an assertive & decisive person after being together for so long.”

“Hmm. This is tough. We’ll have to circle back to it.”

“Probably start off with breakfast at some hole-in-the-wall diner, then going out on a hike or exploring somewhere or something new. Later in the afternoon, I’d say we’d take Gus to a dog park and play with him for a while.”

“Then a nice date night dinner, some wine, and finished off with a movie or some TV at home. Very laid back but that’s our typical weekend routine anyway!”

Justin & Leah: “Every day! Perks of living together.” 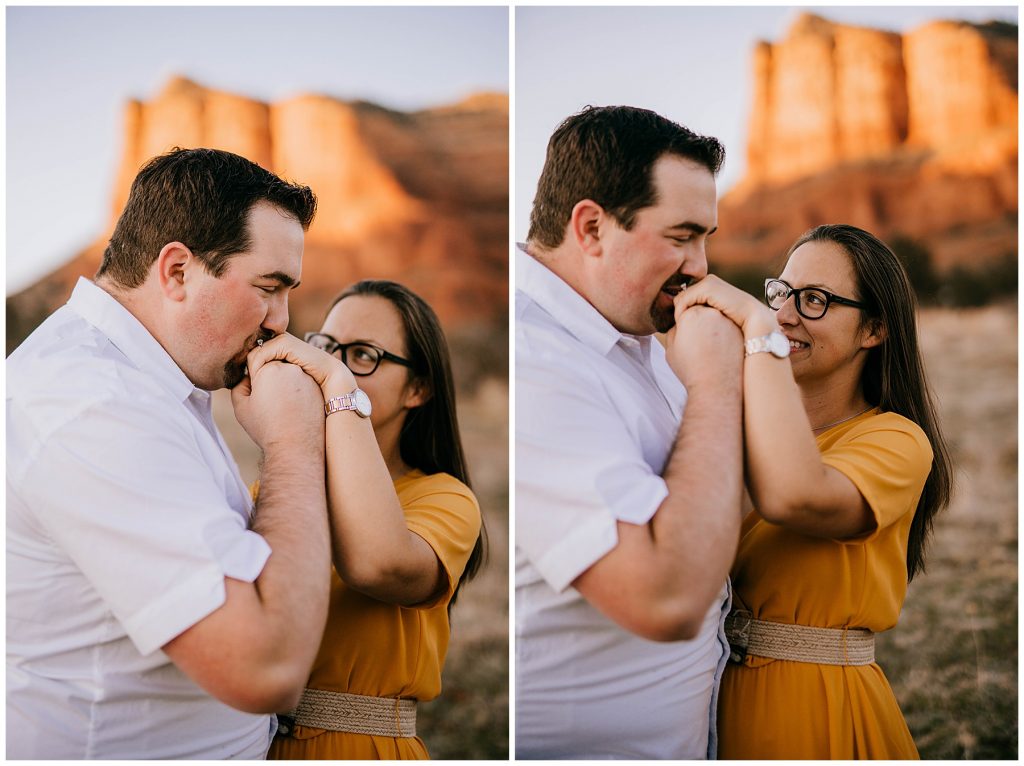 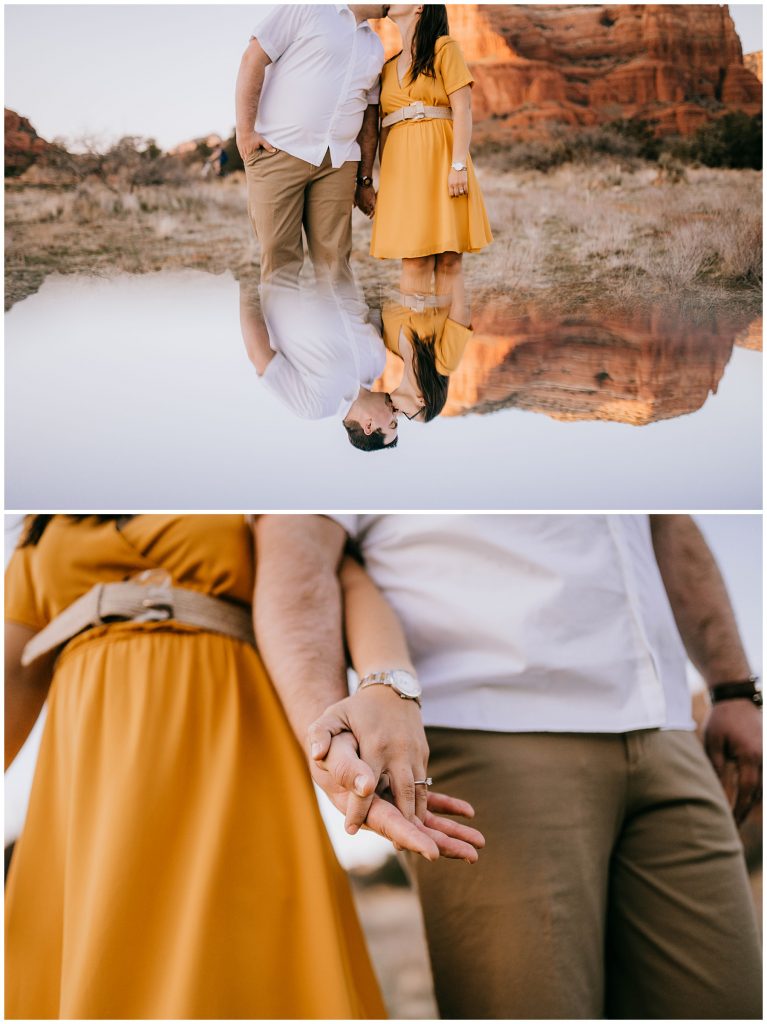 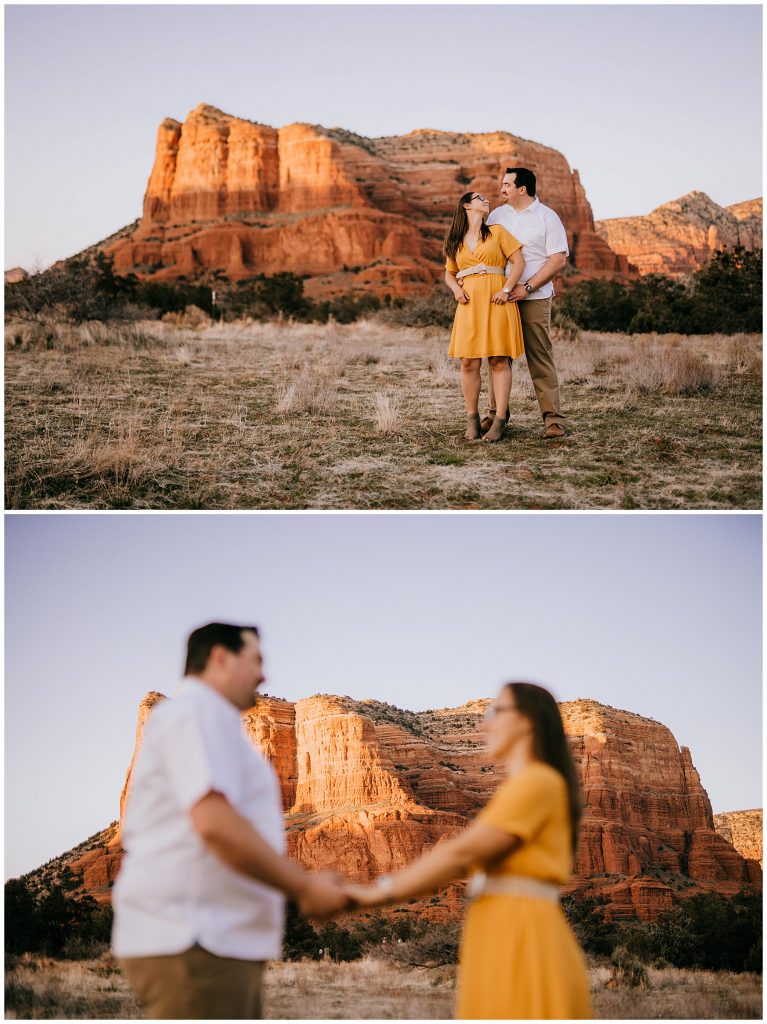 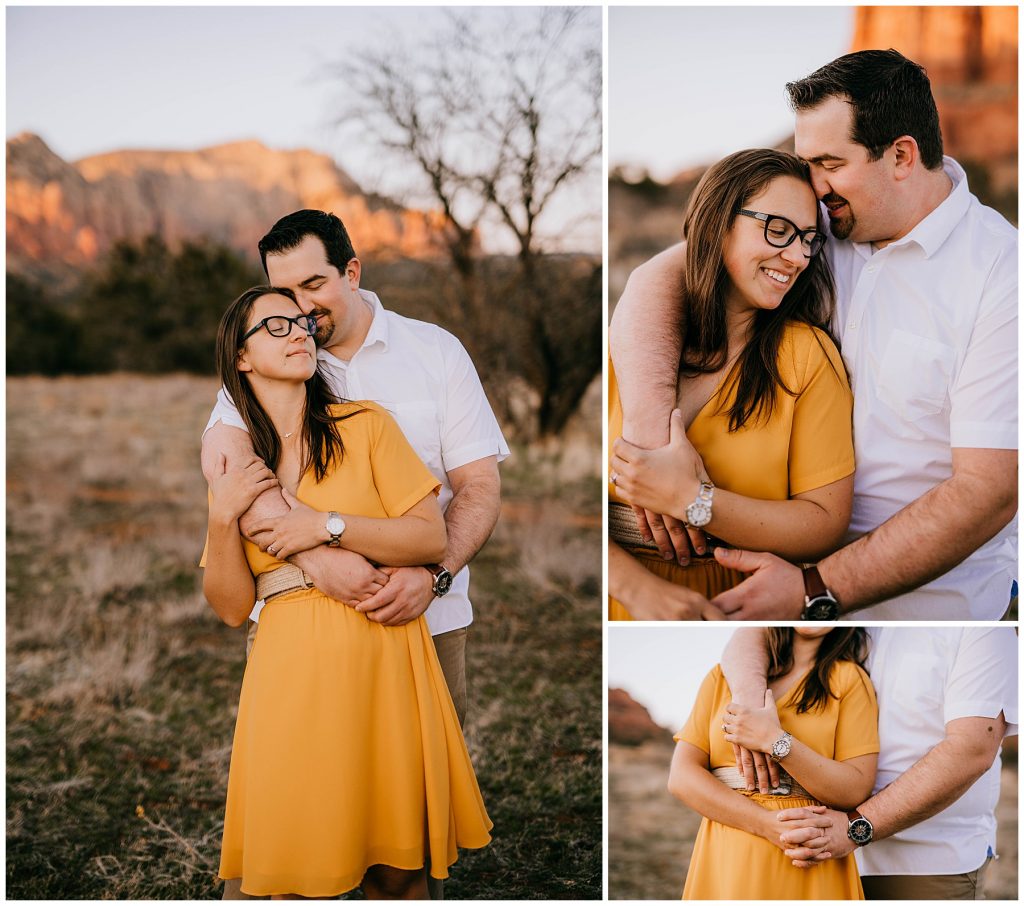 Justin: “I thought Leah was cute, but a typical oddball music kid.”

If you’re engaged or know anyone who is engaged and is looking for an Engagement Photographer Sedona AZ, or a Wedding Photographer, please CONTACT ME.